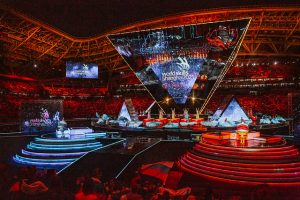 The Skillaroos and Team Australia did a tremendous job in the championship overall, with Patrick Brennan, Maxine Colligan, Clinton Larkings and Patrick Keating all winning medals. Cheered on by their family, friends and WorldSkills experts, every Skillaroo competed with pride and poured their hearts into their chosen trades. It’s sure to be a memory that lasts a lifetime for these young Australians.

The competition itself was held at the Kazan Expo International Exhibition Centre, a purpose-built centre constructed specifically for WorldSkills International, on a plot of 74.8 hectares near the Kazan International Airport. Competitors were vying for a bronze, silver or gold medal, and results were announced at the closing ceremony on Tuesday 27th August at the Kazan Arena Stadium, which was also the location of the 2018 FIFA World Cup.

The road to Kazan began last week when our Skillaroos were farewelled by family, friends and supporters at an event hosted by the NRL at the Sydney Cricket Ground. After the event, they participated in a resilience-building workshop where they had the opportunity to start reflecting on their journey thus far and bond with their fellow teammates. All 15 Skillaroos and the rest of Team Australia (which includes their WorldSkills Expert mentors) departed for Kazan the following day.

The Skillaroos hit the ground running at a short stopover in Moscow, meeting Australian Ambassador to Russia, Graeme Meehan, and also squeezing in a boat tour down the Moscow river. Upon arrival in Kazan, Team Australia settled into their accommodation at the WorldSkills Village (the present-day Universiade Village), a unique residential complex with a well-developed infrastructure and capacity for 12,500 people.

Prior to the first day of competition, the Skillaroos were shown through the competition spaces so they could familiarise themselves with the equipment and get a feel for the space. They also had the opportunity to be involved in a tree planting and flat-raising ceremony.

Day one of competition began on 23rd August after an inspiring opening ceremony the night before. The official Team Australia flag bearer, Clinton Larkings, was voted in by his teammates, and he proudly waved the flag as the Skilaroos entered the arena. In the crowd, cheers from the official Skillaroos Supporters squad could be heard, and a group made up of teachers, mentors, parents, government and industry.

Competition continued across the next three days, with the competitors arising to the occasion and displaying great acts of comradery and sportsmanship. A monumental effort was presented by the entire team, which included a large volunteer workforce from across Australia. The end of the competition on Monday 26th, marked years of preparation and dedication coming to fruition.

Brigitte Collins WorldSkills Australia General Manager shared from Kazan, “we are all very impressed with the performance of the team, they showcased the power of excellence and demonstrated the strength of vocational education and training in Australia.

“Our internationally recognised experts demonstrated once again, their capability and dedication. The Skillaroos, Team Australia and the volunteer workforce should all feel very proud of what they accomplished here in Kazan, Russia. Today we look toward the WorldSkills Australia National Championship and the 46th WorldSkills International Competition in Shanghai.”

Back on home soil, and coinciding with the Skilaroos presence in Kazan at the 45th WorldSkills International Championship, is National Skills Week. This week-long series of events is a celebration of the talents, career pathways, and the positive impact practical and vocational learnings can have for employers, employees and schools, nation-wide.

6 key tips to getting repeat business