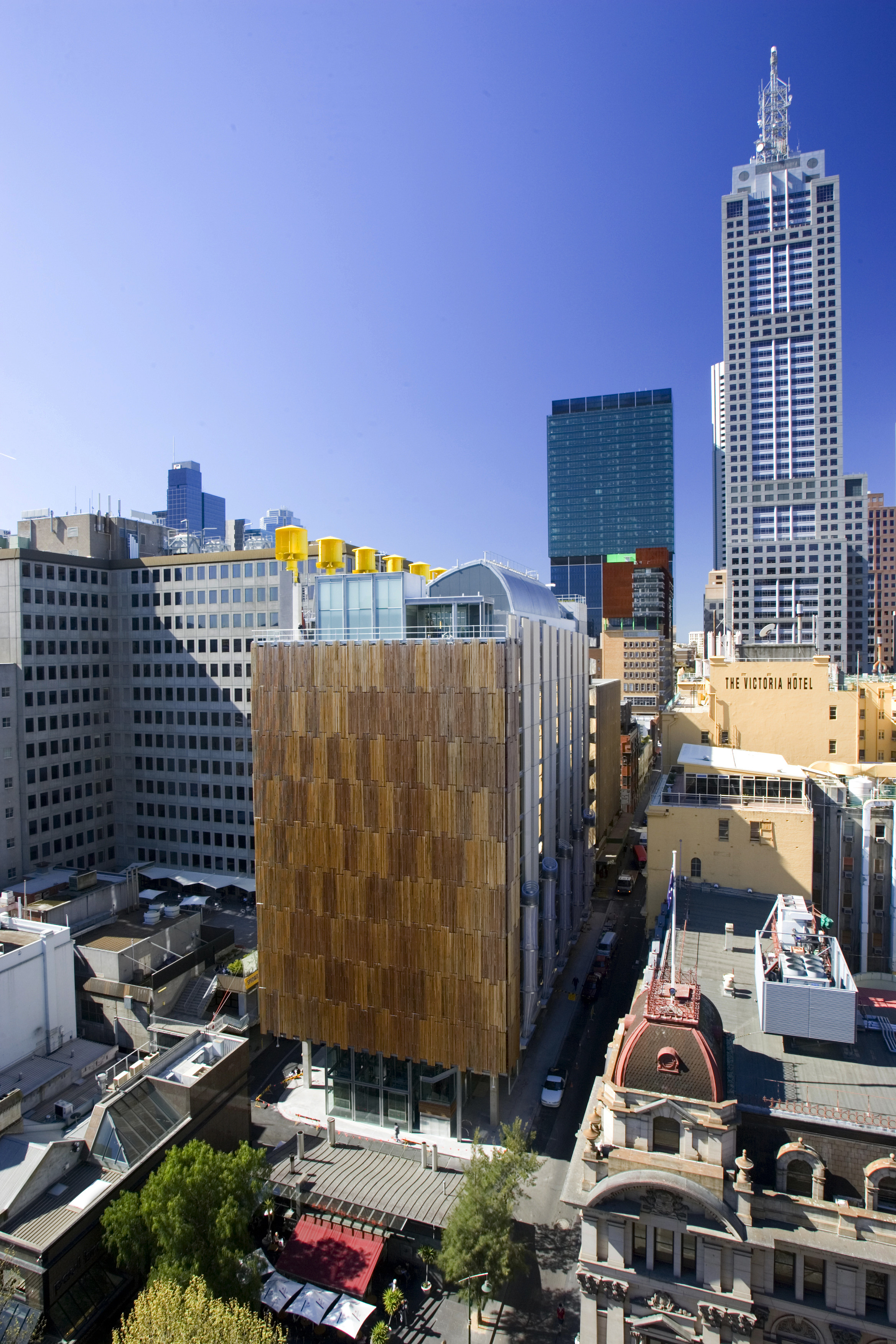 The City of Melbourne, Australia, has pushed the boundaries to make its new offices as efficient as possible in the use of energy and water.

Australia is the driest inhabited continent in the world, yet it has recorded the world’s second-highest per capita water consumption, according to a report by Melbourne-based Hydraulic Engineer CJ Arms & Associates.

The report also states that the City of Melbourne in Victoria plans a 12% reduction in the municipality’s water use by the year 2020 (based on 1999 figures), despite forecast residential population growth of 41%.

To this end, Australia’s greenest and healthiest office building, the A$77 million (US$63 million) Council House 2 – known as CH2 – with 10 stories and three basement floors, opened in the central business district in August last year. It provides office facilities for about 540 staff and includes retail spaces and underground parking.

In 2003 the Green Building Council of Australia launched the Green Star rating system, which is similar to the Leadership in Energy and Environmental Design (LEED) system in the United States.

CH2 is the first to achieve a six-star office design rating, the highest possible. It is a visionary building that harvests sunlight, cool night air, water, wind and rain.

The Green Star system separately evaluates the environmental design and performance of Australian buildings based on criteria including energy and water efficiency, quality of indoor environments and resource conservation.

The building’s hydraulic engineer and designer Christopher Arms of CJ Arms & Associates says the concept building came in for much criticism from the development community.

“They were asking: ‘Why build this style of building when it is so expensive – and for a public building?’,” Arms says.

“However, public buildings should be pushing the boundaries of design and sustainability to demonstrate what can be achieved without necessarily worrying about the developer’s margin.

“We were given the charter to do things that had not been done before, to investigate leading-edge technologies. It was a fascinating process. We had workshops on innovation, asking ‘what if’ and ‘why not’ with a lot of healthy debate. Project architect Mick Pearce was an inspiration.”

CH2 consumes only 15% of the energy of a regular building and about 30% of the water.

Initiatives include a sewer-mining plant in the basement, phase-change materials for cooling, automatic night-purge windows, wavy concrete ceilings, and a facade of louvres powered by photovoltaic cells that track the sun.

However, the true innovation of this building lies in water extraction from the sewer running underneath. One of the many challenges in water supply is that an office building does not produce as much waste water as a residential building of the same size, so not enough waste water is generated to fully supply reuse requirements.

And in this case the building could not rely solely on rainwater because of a long-term drought in south-east Australia.

Arms says the one constant and sustainable source of water in cities is the sewer system. Sewage usually contains about 95% water, and this was where the designers looked for a supply.

About 100,000L of water a day will be extracted from the authority’s sewer main under the street outside the building, along with any greywater from inside the building.

“There is no separation of greywater and blackwater; it is all treated in the same way,” Arms says.

“Greywater has a number of contaminants that require the same level of treatment as blackwater, and the space and cost of separate reticulated piping systems in the building would be an issue for commercial buildings in the city.”

The sewer mining plant in the basement is non-biological and non-chemical. It uses high-tech membrane filters to extract water. The membrane plant has three stages of filtration, using a 200-micron pre-screen, ceramic ultra-filtration and reverse osmosis.

Blackwater is put through a staged membrane treatment plant that sends solids back to the sewer. The resultant water supplies all the building’s needs for water cooling, plant watering and toilet flushing, while reducing its load on the city’s treatment plant and supply system by about 80%.

The recycled water meets all of Australia’s Class A water criteria. Some parameters, such as total dissolved solids at 12mg/L and E.coli at less than 0.1ml/100ml, are lower than the minimum requirements for potable water.

“Cross-contamination is not possible due to the separation of water supply for human contact and non-human contact, such as flushing toilets, watering plants with subsurface flow and the cooling tower system,” Arms says.

“All pipe work is color coded and labelled.”

He says CH2 was being designed five years ago, when membrane bioreactor technology was not as advanced as it is now.

“We heard about an Australian company, NuSource Water, that was investing in a membrane screening process to provide Class A reused water. We were also looking for a small footprint – 60-80m2 – that would fit in the small area available in the basement plant room, and NuSource was developing this technology for commercial buildings.

“So we worked with the company and asked ‘what if we mine the existing sewer?’, because it is always flowing. The City Council liked the idea.

“But it’s very difficult to extract sewage from authority sewer mains. There could be anything in the base product – oil, fat, chemicals – so the water quality is completely unknown.”

One of the downsides to membrane technology is water quantity. Up to 70% of water extracted from the sewer main can be reused and the remainder is returned to the drain.

And more water was requested, as the City Council thought it could be used for street cleaning. So the original plant of 30kL a day was upgraded to 100kL a day.

“The good thing about a membrane plant is that the extra space for the greater output was very small, and we had enough room for the equipment. In the future, the council may also use the water for city fountains.”

Arms says obtaining the necessary approvals is another downside to using an innovative technology.

“It was difficult for the Environment Protection Authority (EPA) and other regulating bodies, because the technology is so new. Their regulations didn’t cover what the design intended. The regulation process has played catch-up and has taken longer than expected.”

Furthermore, the EPA is being inundated with applications for drought-related technologies, which is taking up a lot of its time.

“The plant has been running intermittently for the past few months. It’s still in the commissioning phase – new technology takes considerably longer than conventional systems to commission.

“Strong toilet paper was getting in the sewer main and not breaking down like conventional toilet paper. So we changed our pre-screening system and the plant will be back on line soon.

“The challenge with sewer mining is that you don’t know what’s there, and you can’t control what’s in the sewer main. For example, we can control the toilet paper used in the building, but not in the rest of the city.”

Some of the recycled water is used in vertical gardens that run the full height of the northern facade. The gardens help with shading, glare and air quality.

Even though sewer mining is the main source of recycled water, rainwater is captured from a roof area of 1500m2. Conventional and siphonic roof drainage were considered for the rainwater collection system. However, the siphonic system was not recommended, as the roof area was not enough to produce the required flow rate through the pipes.

Assuming 70% capture, and rainfall of about 55mm a month, a yield of 57kL a month (0.7ML a year) is expected. The rainwater is collected and stored for use with treated wastewater for toilet flushing, landscape watering, cooling towers and wash-down.

“In Melbourne it rains up to three days a month, therefore you receive all your rainwater over those days. In the past (before the drought) it was 50mm of rain on average per month. It’s less than 28mm at the moment. This means you have to design a storage facility to capture rain for the whole month – often in just one day.

“This can mean a large storage facility in the basement of a commercial building, and it is very costly in relation to space. The cost of pumping it back up, with its associated greenhouse emissions, must be considered with all other water conservation alternatives.

“You need to look at the location, and the rainfall patterns on a daily basis, before making the assumption that rainwater harvesting is the only answer. Quite often it is not viable on its own.”

Other initiatives to reduce water consumption and increase harvesting include flow control to all fixtures (including urinals with sensor-triggered flushing) and reuse of fire sprinkler test water.

Arms says actual water use in CH2 has met the design figures, which predicted a reduction of 70% in mains water.

“The building is performing extremely well under load. There is a two-year settling in and commissioning period with technology that has never been used before. It was working well until the toilet paper issue.”

Safety regulations require sprinkler systems to be tested regularly, and this means using large quantities of drinking water. The engineers estimate regular testing at CH2 requires 10,000L a week – water that would usually be discharged to the sewer.

“At the time of designing CH2 the regulations did not allow for sprinkler test water to be re cycled,” Arms says.

“This has been changed in Melbourne, allowing sprinkler testing to use a completely recycled system.”

In CH2 the sprinkler test water is stored in the potable storage tank for use in the building’s general fixtures.

A designer needs facts and figures. Without knowing the rainfall figures, for example, it would have been hard to make decisions on the method of water capture. So the whole building has been metered.

“We know how much water there is and where it is going. A lot of design engineers still assume, but we have actual figures.”

The meters will also help to detect water leaks. The hydraulic engineer’s report says water loss via leakage usually accounts for 11% of mains supply, for cities and houses. Therefore, water meters on the inputs and outputs to all water services in CH2 will ensure early detection of leaks, immediate repair and better water management.

With emerging technologies for maximizing water harvesting and extraction, how would Arms design this building again?

“I would use a mix of technologies. In country areas we are designing and installing passive technology treatment plants, but these generally require space. They have lined in-ground filters and use plants and media for blackwater treatment.

“Next time I would look at mixing membrane and passive technology to treat and extract blackwater. I would use the plants in the roof-top garden as a passive treatment zone, with membrane technology possibly providing the final filtration.

“Passive technology is the way of the future for us. We need to limit the energy use of equipment to minimize our greenhouse emissions and we also need to maximize our use of solar energy to power the systems we design.

“Also, how do we design passive treatment systems, which are used in locations where land is not an issue, for use in inner-city buildings?

“Water is so cheap in Australia there has never been an incentive to reduce consumption. But the incentive now is that if we don’t do anything there won’t be any water.

“The opportunity is in treating waste water and using decentralized waste-water treatment systems with minimal power requirements and trying to use the building elements as the treatment zone.”