Bringing the heat with manifold systems

Mainline plumbing has long been at the forefront of hot water delivery in Australian households; however, there is an alternative solution that offers many benefits. Justin Felix explains. 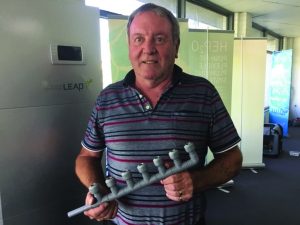 There have never been so many heated water options available to the Australian plumbing industry.

While the major focus is on running costs, unit capacity and performance aren’t too far behind. And when it comes to performance, the availability of hot water when you need it, where you need it. And that point of use location can often be a long way from the actual hot water unit, therefore you can be kept waiting a long time for the heated water to reach the outlet.

With a manifold system less fluctuation exists when taps and other appliances are turned on elsewhere in the home. There’s no hammer noise either.

The concept of a manifold system has been around for decades, though with the advent of plastic pipe (polybutylene ‘PB’ was the first) in domestic installations some 40 years ago, there was a push in some countries to do more with manifold systems, to serve both outlet appliances and in-floor hydronic heating. The same cannot be said for Australia though. For one reason or another, the system hasn’t exactly taken off here.

When you consider the benefits of manifold over traditional plumbing systems, it’s hard to understand why.

These days PEX is the leading plastic pipe by volume.

One of the key benefits of a home-run manifold system is the fact it’s joint-free, and like it or not, failure of joints is a growing issue across the industry. Sometimes it’s the mechanical joint itself, while on other occasions it comes down to poor installer practice.

The advantage of having no joints hidden away in walls or underfloor would seem pretty obvious.

So let’s take a closer look at manifold systems, their advantages, applications and how they compare to traditional mainline plumbing systems.

Broadly put, manifold systems are not complex. While they can exist in multiple forms, their basic structure consists of a main service line that feeds into a tubular chamber with multiple connections to outflow lines.

That’s a dedicated pipe from your water source to the kitchen sink, another to the bathroom sink, one to the shower, and so on. While that may seem like a lot of pipe running around a residential home, it results in more consistent temperatures, pressure and few wasted litres down the drain.

Having a dedicated pipeline from a manifold near the hot water cylinder to each tap or fixture means hot water goes directly where it’s needed without sitting idle in larger feeder pipes that serve multiple outlets.

On top of that, given each fixture is supplied by its own line, pipes of a smaller diameter can be used. That in itself means less water is wasted.

Manifold systems can be made from various materials including the likes of copper, PB and PEX, and as with most things, each has its own advantages and disadvantages.

We caught up with Leap Civil managing director Dave Porteous to learn more about its PB product Maniflow and these alternative plumbing systems as a whole.

“Initially we started plumbing the whole house in manifold – both hot and cold,” says Dave.

“The unique selling point we pushed in the early days was ‘a balancing system’ which ensured you avoided being scalded in the shower when someone else turned the kitchen tap on.  That was, and in plenty of homes still is an issue due to large diameter of pipes and the extra flow that travels through them.”

But then the drought came.

“When things began to dry up, I said to myself, ‘it’s time to look at things in a different way now’. We can boast it as a water saver because that’s exactly what manifold systems are.”

Dave and his team at Leap changed the design a little bit so that only hot water was running to the manifold. They realised that they didn’t need to manifold cold water. It was using extra pipe, it took longer and it cost more.

“So we went back to mainline plumbing for cold and turned to manifold for hot. We knew that would give us our water savings because people work automatically. Just watch people who want hot water. They’ll turn the tap on and won’t do anything with the cold water until the hot water arrives. Very few save that cold water,” says Dave.

“The other cost saving we found comes from discharging water to the sewerage system. That is based on the amount of water that comes through the meter, rather than how many times someone uses the bathroom. “

So after the drought Leap had two unique selling points:

a – the system will save you water

b – the system will save you money because you’re discharging less water down the sewerage system.

Unfortunately it seemed plumbers in Australia didn’t quite understand it, so the adoption rate wasn’t as high as Dave would have liked.

While installations can look tricky at first glance, Dave assures that most manifold systems can be installed in virtually the same time as a traditional mainline system and can be done so in virtually any home, so long as the plumber understands how the chosen system works.

To ensure the system works to its full potential, it’s recommended that the hot water unit is located as central to the house as possible.

With water and energy seemingly becoming more precious, there’s a bigger push for more sustainable building practices to be explored now and in the future. With that in mind, manifold plumbing systems seem to have evolved well ahead of their time and should be considered as an alternative method by both plumbers and builders all over the country. 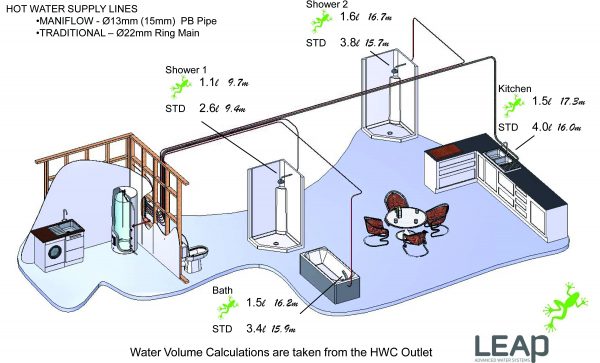 The water rates for water in and sewage out equals around $60 per year.

Add to that the cost of heating 15,000 litres of water and you can see where the savings stack up.