Under pressure: testing made simple with Safeguard

A new product designed to simplify hydrostatic testing will bring plumbers into the digital age and act as an independent testing unit. Anna Hayes finds out more…

In an increasingly technological age, the plumbing industry has perhaps been a little slower than most to embrace the world of automation and app-based solutions.

Couta Group’s recently launched Safeguard testing program takes a step in that direction, simplifying the process of hydrostatic testing and giving peace of mind by generating digital reports at the conclusion of each test.

Safeguard is a simple process. The plumber installs or repairs a piping system and then attaches the Safeguard Bluetooth pressure transducer to the system.

They then pump up the system to the desired pressure and visually inspect joints to ensure that they have been crimped correctly and aren’t leaking. The system needs to be left until any pipe expansion has stabilised – this normally takes a couple of hours.

Once this happens, the plumber switches on the transducer, connects their phone to it and inputs the relevant site data. They then pump the system up to the desired pressure (generally 1,500kPa) the test starts automatically once the pressure is in the correct range. The testing process takes 30 minutes.

Pass or fail, the app provides a full report of the test on conclusion which can be emailed or simply stored in the app, meaning it can be furnished on request making it a valuable tool for plumbers when it comes to transparency on a job site.

Gavin Shaw is the managing director of the Couta Group and he says that they had spotted a gap in the market when it came to hydrostatic testing.

“We thought that this was a great way to get an independent report showing that the plumber had done everything possible, in terms of due diligence, to make sure that the installation was correct.”

The product launched in June 2019 and has been very well received, particularly when it was shown at the World Plumbing Forum recently.

The Safeguard method is a far cry from the traditional testing technique.

The ‘Bucket Test’, as it is referred to, involved using a hand pump to run water into the system.

“It’s got an analogue gauge which I guarantee has never ever been calibrated, or if it ever has it never was again. It’s difficult to read and it’s difficult to monitor pressure drops. You will, throughout the course of the test, have some pressure drops but we’ve worked out what the allowable limit is to determine a pass or a fail.”

The crux of the matter is that it was simply someone’s word that the system was ok – it was tested and didn’t leak and that constituted a pass. Gavin says they recognised that QA procedures were somewhat lacking in situations where pipes or systems did malfunction. Safeguard, he says, provides a digital record that the testing was, firstly, carried out, and that that testing shows the system meets the requirements of the AS3500 standard.

He adds that Safeguard can become a vital tool for plumbing companies hiring subcontractors as it gives them peace of mind that a job has been done.

“They basically say to the subcontractors that if they produce the test report they’ll pay their bill – without it there’s no proof that the job conforms to standards and doesn’t have any leaks in it.”

For building companies too it has become part of the QA procedure because they can see that plumbing work on new jobs has been done to satisfactory level. 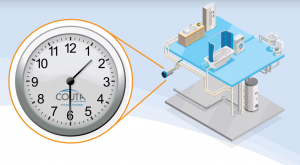 “If someone comes along later and puts a nail through a pipe, they know it’s not the plumber’s fault. It forms part of the documentation for the purchase of a new home.”

Gavin also feels that there should be some incentive from insurance companies for plumbing companies who can present or show independent evidence of systemic and ongoing hydrostatic testing of all of their installations.

“To me, I think they should give reduced premiums to people who use the system, they should embrace it. It is technology that hasn’t been in the marketplace before; really, in this digital age, everyone should be on it.”

He adds, “The Safeguard system doesn’t 100% guarantee that the system is okay but it does pretty much everything possible to ensure that it is.”