Did you know that investing in a tundish can save you time and add a professional polish to bathroom and laundry installations? Brihony Tulloch has more.

Bathrooms and laundries have transformed from an afterthought to a statement room in most modern homes. Therefore, the appearance and practicality of these rooms should be held to the highest standards for end users. That’s why tundish installation should not be overlooked when trying to achieve the best result. 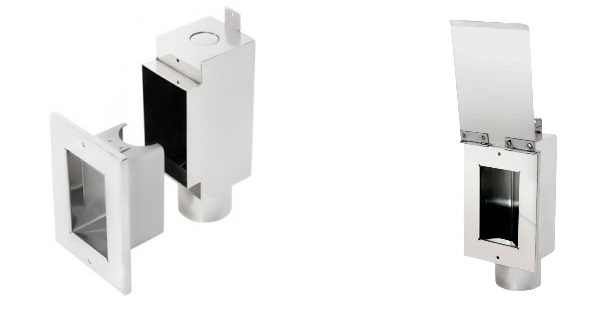 A tundish is a fitting installed on pipes to provide an air-gap and catch any drips caused by overflow. This in turn helps prevent unsanitary cross connection, water damage or spillage. However, tundishes are often overlooked as an unnecessary expense by plumbers during bathroom or laundry installation.

But the truth is, making the effort to install a tundish can save plumbers time and reduce the risk of water damage or safety hazards for end users.

Founder of MAG Specialised Plumbing Products Mark Griffiths has over 30-years experience in plumbing and tundish installation. He even has a patent on two inwall tundish designs.
Mark has seen the benefits of tundishes first hand.

“While purchasing and installing a tundish is an additional expense for plumbers, it’s a huge time saver as they won’t have to run such a long drain line to discharge any condensate or washing machine pipes,” he says.

“Tundishes aren’t commonly used because plumbers will get hold of a project, but cut these products out because they can figure out a more cost-effective option. But they don’t realise it’s at the expense of the finished look.

“Many modern laundry and bathroom designs no longer have a trough to filter the washing machine hose through, so a tundish makes things easier and more compact.”
While developing the design for his own inwall tundish, Mark realised that there’s a demand in the industry for the solutions this product can provide.

“We were hearing from engineers and architects about how they were struggling to deal with a washing machine hose in apartment buildings that don’t have a trough to conceal it,” he says.

“Even though tundishes can be retrofitted, some plumbers would lay some PVC on the floor and run the hose through that and across the wall, then the end-user is stuck with this ugly looking pipe through the floor which can get damaged or break and cause problems.

That’s when Mark decided to come up with a design that served both aesthetic and hazard purposes.

But there were still issues arising from the tundish sitting too deeply inside the wall.

“The other problem we had was that plumbers were complaining that when the tundish was installed, and it came to plastering, they found the cover plate wasn’t engaging into the box as it was sitting too deep into the wall. So we came up with a spacer design that could be cut in different increments to allow it to meet up with the cover plate, so it engages in one piece,” says Mark.

“We had some issues when the washing machine hose was fitted into the box, and the condensate pipe was coming through the top of the box, the water from that pipe was dripping, hitting the top of the hose and splashing onto the floor.”

The solution was having an internal baffle put in the product, which is the key feature of Mark’s patent. Now the water would hit the baffle which caused it to roll to the back of the box and run down into the tundish. The water and washing machine problem was no longer an issue.

But Mark remains perplexed as to why tundishes aren’t the go-to product when it comes to laundry and bathroom installation.

“The product doesn’t come with instructions, but they’re a pretty simple device to install. You have a tab there so it can be screwed to a bit of timber then you’ve got the outlet there that can go to a PVC pipe,” he says.

“I’m not sure if it’s a lack of knowledge as such. I think when these first came on to the market plumbers would just buy them and pull them out of the box and fit it without really looking at how it works.”

Have your say on Standards