What if a trusted handbook gets rainhead requirements wrong? Russell Kirkwood, Rowan Gregory and Richard Kingston, all of Dam Buster, collaborate to challenge past theories.

Roof plumbers are entitled to think they can’t go wrong if they follow the clear requirements of the Australian roofing standards and the Australian standard hand books.

However, Dam Buster believe SA HB 39-2015, Section 5, 5.7.3 – offered as a compliant option for rainhead installation – is hydraulically unsound. It contravenes many of the primary principles of AS/NZS 3500.3 box gutter and overflow design.

To ensure adequate overflow provision, the design in Figure 5.7.3 relies on the top of the rainhead being no higher than 50% of the flow depth of the box gutter.

In theory, this type of installation still allows water to flow over the top of the rainhead itself (then escape to the ground) should the rainhead and/or the overflow provision slot be inadequate or become blocked. 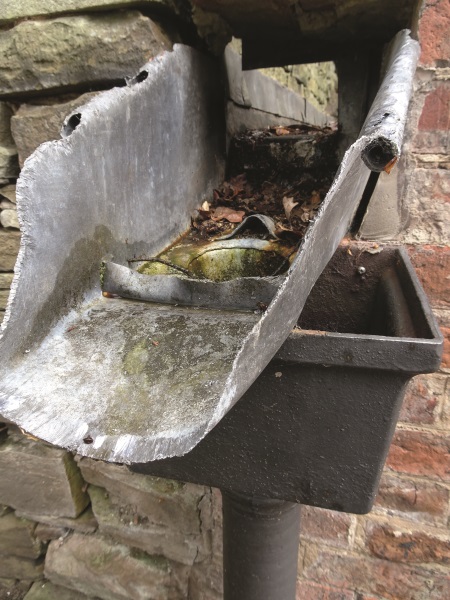 On paper it looks like it might work – and at low flow rates it may well – but as soon as you apply significant flow rates the problems begin. More on this later.

The design also indicates that the box gutter overhangs into the rainhead for a considerable distance.

However, such an installation will cause interference with the operation of the ‘nappe projection’ as water flows out the end of the box gutter into the rainhead.

Water will then flow out of the front overflow slot at far less than the ‘one in 100 years’ average recurrence interval (ARI) flow rates. If the front slot becomes blocked, water must back up into the box gutter then flow over the top of the rainhead.

This brings into question the operation of the seal between box gutter and rainhead – which would be very difficult to implement with this design.

Therefore, water would most likely enter the building under the box gutter sole before any over-topping of the rainhead, as the rainhead is to be set higher than the sole.

The team at Dam Buster have never seen a rainhead installed in accordance with Figure 5.7.3, that is, with the top of the rainhead no higher than 50% of the gutter flow depth. What we see are distorted versions.

History forgotten
To a large extent Figure 5.7.3 seems based on a very old (and hydraulically sound) English and European design as illustrated in Image 1.

The image shows an English rainhead design on an Industrial Revolution era cotton mill in Manchester.

It incorporates a step down from the box gutter sole, then a small weir to direct low rainfall into the rainhead below.

But if the volume of water is great enough, or the rainhead/downpipe system blocks up, the water crests the weir and flows freely outside the building.

You can see the damp mark on the wall of the box gutter chute where water has recently overflowed across the weir.

The step down from the box gutter sole prevents water from flowing back into the building, and even debris such as leaves will not stop the system from operating. It’s certainly not pretty, but it works.

The visual problem with the old English design is obvious from the image, as you can see right into the building.

This type of installation ensures that the box gutter cannot be seen, nor can the internal ‘works’ of the roof. As a consequence, it is the preferred and accepted option cosmetically for plumbers, builders, owners and architects.

The trouble is that fitting the rainhead in this way – obscuring the box gutter and parapet opening –prevents water from flowing over the top if the primary overflow slot is obstructed or overwhelmed as described in Figure 5.7.3.

It therefore defeats the entire purpose of that design.

Most installations across Australia have the rainhead covering the entire front of the box gutter, making them non-compliant.

Images 2, 3 and 4 show typical installations in which the rainhead covers the entire face of the box gutter opening.

The installing plumbers have considered the overflow slots (round or rectangular) to be sufficient for the overflow – which they are not.

Why do they pass?
Regulators conducting audits have been passing installations as being compliant and in accordance with Figure 5.7.3 (even if they sometimes require the overflow hole or slot to be bigger).

The simple fact is they are not compliant with either SA HB 39-2015 Figure 5.7.3 or any of the general methods as detailed in AS/NZS 3500.3.
As demonstrated further below, the set-up in Figure 5.7.3 does not work, and there is no guidance in either of these documents on how this type of rainhead should be designed and sized.

So it’s no real wonder that regulators have been approving many different interpretations of Figure 5.7.3.

However, it’s very concerning that some regulators have been approving the installations on the basis that the rainheads have an overflow hole – of any shape or size.

Typically, the regulators ignore the requirement for the top of the rainhead to be no higher than 50% of the box gutter flow depth.

After a quick look at Figure 5.7.3 you could be forgiven for thinking an installation such as that shown in Image 2 is compliant. But as soon as you home in on the 50% height restriction, it’s obviously not right. It always pays to read the fine print.

Hydraulic chaos
Modelling of the Figure 5.7.3 design by engineers in the Dam Buster team has shown that the design is hydraulically unsound.

Also, it cannot be correctly sized because there are no calculations or formulas to suit this design in SA HB 39-2015 or AS/NZS 3500.3.

The broad picture, as drawn by the Dam Buster engineering team, is shown in Figure 1.

In this example a nominal roof catchment area of 100m2 has been adopted, and the 100-year ARI rainfall intensity of 187mm per hour is for Melbourne.

Due to the lack of guidance it has been necessary to make a few assumptions.

Let’s say there is 25mm of metal above the overflow opening (anything less would look odd and would not meet the intent of Figure 5.7.3).

If the top of the rainhead is set at 50% of the maximum flow depth, then there is only 45mm remaining for the overflow opening. This is less than the design maximum flow depth of 90mm, and hence does not work.

In summary, a rainhead complying with Figure 5.7.3 does not exist, and so cannot be constructed. This is clearly demonstrated by the simple calculations above.

Consider now a rainhead complying with Figure 5.7.3 but not meeting the requirement that the overflow weir be set at 25mm below the box gutter sole. This would result in a modified version of Figure 5.7.3, as shown in Figure 2.

Much of the water flowing out of the box gutter would go straight out the overflow instead of into the lower chamber of the rainhead and the downpipe. This is due to the nappe projection not being accommodated in the rainhead.

This would circumvent any normal operation of the building’s stormwater system and cause local inundation of nearby areas even with modest rain.

In many conditions, the nappe projection would directly impact with the front face of the rainhead.

These major problems would lead to what can be described in layman’s terms as ‘hydraulic chaos’ for any water not flowing into the rainhead.

The extent and effect of this hydraulic chaos cannot generically be modelled. It depends on numerous factors, including:

In summary, the outcome of this cannot be predicted or modelled except in relation to specific sites, rainheads and rainfall.

Thus it is impossible to certify compliance of the overflow provision or overall performance of the rainhead and downpipe combination.

Any plumber who did provide a compliance certificate for such an installation would be taking a substantial risk.
The installation could not be considered to meet the ‘deemed to satisfy’ provisions in AS/NZS 3500.3, as there are is no specific guidance for the design of a rainhead as in Figure 5.7.3 in this code.

In general our experience indicates that AS/NZS 3500.3 has been well researched over the years, but it seems that nobody has paid particular attention to the installation method in SA HB 39:2015 Figure 5.7.3.

If this method had ever been prototyped and tested, the deficiencies would have been exposed.

Unfortunately, most plumbers (and regulators) have misinterpreted Figure 5.7.3 when installing (or approving) rainheads that bear little resemblance to the ‘deemed to satisfy’ rainhead specified in AS/NZS 3500.3.

In particular, on almost every rainhead viewed by the Dam Buster team, the overflow provision is non-compliant and inadequate.

This results in an unnecessarily high risk of box gutter failure, causing internal inundation and damage to the building.

Conclusion
Figure 5.7.3 creates conflict and confusion when viewed in light of the otherwise clear requirements of AS/NZS 3500.3 regarding rainhead sizing and design requirements.

Dam Buster unequivocally denounces the rainhead shown in Figure 5.7.3 and would like to see it removed in its entirety from HB39 as soon as possible.

Roof plumbers should immediately consider abandoning any attempt to install rainheads based on Figure 5.7.3, otherwise they will risk substantial liabilities for defective work, and also for any resultant damage.

If push comes to shove, they will not have a leg to stand on – no matter which way anybody looks at it.