The Royal Australian Air Force (RAAF) Base Williamtown recently contacted GeoSentinel about issues they were having with contamination.

Since the 1970s, the Air Force’s emergency response fire fighters have been training with fire fighting foams known as Aqueous Film Forming Foams (AFFF). AFFF, used to put out liquid fuel fires (such as an aircraft fire), contains chemicals known as per- and poly-fluoroalkyl substances (PFAS). During training exercises AFFF is sprayed into the environment and is now known to have leached into waterways, groundwater and the soil at dozens of sites across the country, include Williamtown.

Studies have shown a probable link between PFAS and cancer and there is now a major clean up operation underway in these areas.

The law clearly places responsibility for the proper handling of liquid waste on the principal in charge. So, when it came time to begin work on the Wiliamtown NAAC Project, Lendlease, as the builder responsible for liquid waste, needed to ensure that the waste was handled correctly.

The best way to ensure compliance was to provide all the trades onsite with access to Washbox so that all of the trade washout happens onsite. With the closed-loop Washbox system, all liquid trade waste is captured and turned into a solid that can be easily recycled.

Washbox also recycles all the wash water after the waste is removed, so no liquids are discharged into the environment. 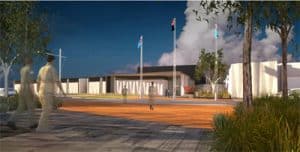 GeoSentinel provided the project with a total of four Washboxes to service the various locations and finishing trades over a 76 week period.

The Washboxes are hired to coincide with the ramp up of finishing trades onsite. As such the first Washbox was delivered in early 2017 and two additional Washboxes are scheduled to follow and then a fourth once construction of the final building is underway.

By coordinating the Washbox delivery in this way, the right tool washing capacity can be delivered efficiently to the right locations at the right times to meet the site operational and budget requirements.

Each Washbox can provide tool washing for around 40 finishing trades and in full use will save approximately 350,000L of water per year. As the Washbox does not release any of this liquid, it also prevents 350,000L of contaminated water from being discharged to the environment.

The project is not yet complete, but with four Washboxes onsite, Lendlease is due to save more than one million litres of contaminated water from being discharged to the environment.