More than a pipe dream

The Hydraulic Consultants Association Australasia (HCAA), is researching the shortcomings of the current Australia Standards with regard to designing hot and cold water distribution systems. Sean Carroll speaks with the president to discuss the aims of this venture. 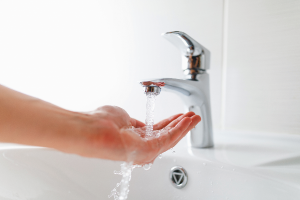 As an Industry first initiative, the HCAA are undertaking real life testings and studies on various types of buildings to determine the actual flow conditions throughout the day and more specifically at peak times. It is believed that its findings will change the way the industry currently designs these systems by supplying validated data.

The Standard for sizing pipes today was created decades ago with somewhat archaic methods. It’s because of this, that the HCAA are hoping to prove to Standards Australia that there are better ways that can more accurately and appropriately size pipes.

There are specific deficiencies in the current AS/NZS Standards for sizing hot and cold water systems as the guidelines and reference tables provide “holistic” data in the form of loading units or litres per second for combined hot and cold flows to fixtures.

These older numbers limit the engineer to design a system that is good enough for a single or group of residential buildings only.

The Standard directs engineers to the Probable Simultaneous Demand (PSD) for up to 100 multiple dwellings. The inference is that the PSD is for combined hot and cold flows with no commentary on an acceptable method to isolate these two.

HCAA president Nick Soden spoke with me about why the organisation is setting out to change the Standard and how it aims to do this.

“We’re basically trying to support Standards Australia by giving them access to information that allows them to update these formulae for the betterment of the industry,” he says.

“HCAA Director, David Steblina wrote a white paper which outlined the shortcomings of our current design solutions. The Australian Building Codes Board (ABCB) have recognised this document and the game changing efforts made by the HCAA.”

A properly engineered hot and cold water distribution system reduces the loads on pipe work and pressure surges created by over-sized pumping equipment. This scenario is very common in high rise buildings and played out because the engineer is forced to use a DTS solution that is not applicable to our modern lifestyle.

Some of the methods currently used to calculate given flow rates and pipe sizes have gradually become archaic as plumbing technology evolves. The flow rates required to run a shower or toilet is nowhere near as much as it was decades ago when these rates and formulae were created.

“What we found is that the PSD rates used in the Standard are based around the old flow rates of fixtures, that existed prior to the requirement for low flow tapware,” Nick says.

“When they came up with these flow rates in the 40’s, they couldn’t monitor the actual flow rates like we can now as they didn’t have the technology to do it”.

“The fixtures we’re using in Australia over the last 10 years are half or sometimes even a third of what the flow rates were originally based on. But we’ve never updated the formulas to match these water efficient taps.”

The HCAA want to future proof the industry against developing technology changes tooBy proposing to convert the amount of fixtures to a flow rate based on the fixtures individual flow rate and not give it a loading.

For example, in the future, if vacuum toilets become prevalent, you won’t have a loading unit that is based on a 12 or even 4.5Lflush.

“Our aim is to do five sites for a whole year each, possibly longer. That way you see all of the seasons and the different flow rates throughout the year,” Nick says.

“Once we’ve researched the information available, we will go to Standards Australia and outline all the data we’ve collected and how we can update the Standard to make them much more in line with real world data.”

The HCAA have made the data collected to be publicly available on its website. This data is of monitored sites in Sydney and Canberra, where the real life flows are transmitted to the cloud at five second intervals and are available to the public.

Earlier, the HCAA collected data from a 13-storey apartment block in Newcastle in 2017. The monitoring devices were attached to the incoming water supply meter, the flow results measured at five minute intervals and compared against the estimated flow criteria from the American Society of Plumbing Engineers (ASPE),the German (DIN) Standards and then against AS/NZS3500. 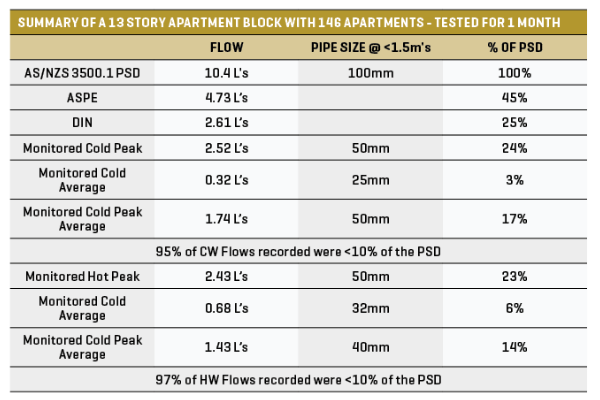 For the Newcastle building the Australian Standard required a 100mm pipe size, ASPE required an 80mm, and the DIN requires a 50mm.

“For apartments at least, we’re seeing that the German DIN Standard is very similar to the flows we’re monitoring on site,” Nick says.

“Our proposal at the moment is to initially write performance solutions in accordance with the Plumbing Code of Australia, so we’re going to get a template prepared for our members.

“Once we feel like we’ve collected enough data, our members can then prepare a performance solution in line with the German DIN Standard. Again, this is just talking theoretically because we haven’t collected enough data yet to know if the DIN is exactly what we want to go with.”

After more people feel comfortable using the new method of pipe sizing, there will be plenty of data that Standards Australia can use to potentially update the legislation.

“We’ve got Deakin University and Newcastle University assisting us at the moment, as well as a graduate helping us out,” Nick explains.

“We’ve also got, CIBSE, which is the UK version of Engineers Australia. They’re working with us too as they’re doing a residential flow rate study similar to ours through Heriot-Watt University.”

“We are fortunate that the HCAA have been recognised on the International playing field, all these different bodies are sharing information found at their monitored sites each with the same goal of influencing change in their respective Standard.

At the moment, it’s a waiting game.

Taking the lead in a lead-free Australia