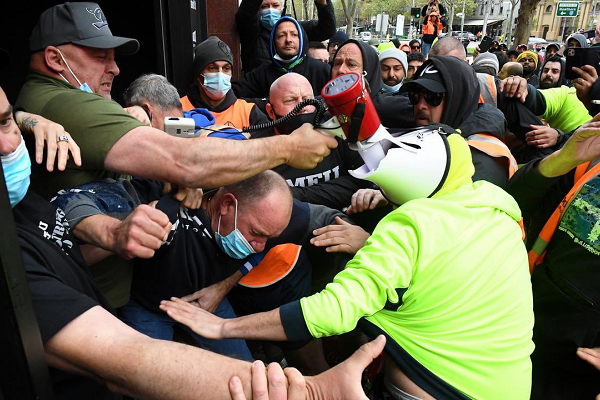 The Victorian government has shut down all construction sites in metropolitan Melbourne and all other locked down local government areas following violent protests on Monday. It will last for two weeks.

Protesters at the CFMEU head office were rallying against the government mandate that requires all construction workers to have at least one COVID-19 vaccine dose by 23 September 2021.

The only permitted exceptions to the ban will be to ensure the safe closure of a site and to conduct urgent and unavoidable repairs.

An amnesty will be put in place so limited numbers of workers can attend construction sites in order to shut them down safely.

According to the new rules, sites will only be permitted to reopen when they can demonstrate compliance with the public health orders.

“We’ve been clear: if you don’t follow the rules, we won’t hesitate to take action – we have seen widespread noncompliance across the industry and that’s why we’re taking necessary steps to protect every single Victorian,” Victorian minister for industrial relations Tim Pallas says.

“We put the industry on notice just a week ago, we have seen appalling behaviour on site and on our streets, and now we’re acting decisively and without hesitation.”

The Victorian Opposition has called for the state government to immediately reverse its decision to shut the industry down.

Shadow Minister for Industry Bridget Vallence says there was no justification for the ‘panicked decision’ and argued it should be targeted at the areas that represent the most risk in the industry.

Australian Council of Trade Unions secretary Sally McManus condemns the violent protest that occurred outside the CFMEU office. She blames the protest on “extremists and conspiracy theorists” and says the protests were organised by people outside of the construction industry.

“We know from social media networks that the same people who were at the rallies on the weekend were asking people to come to these ones and to dress up in high vis,” she says.

“That’s not to say that there weren’t people there who were also construction workers, there were. But the people organising and orchestrating it were people with other motives.”