The Cadetship in Plumbing Engineering knocks a year off the traditional apprenticeship, but what it lacks in duration, it makes up for in intensity. Jacob Harris explains.

A new training model for obtaining a Certificate III in Plumbing has been developed by the Master Plumbers and Mechanical Contractors Association of NSW.

While the three year cadetship has been criticised by some as destroying the four year apprenticeship, on closer inspection this intensive training scheme is by no means the ‘easy road’ and looks set to produce some pretty impressive results.

As of August, the Master Plumbers College of Excellence is home to the Cadetship in Plumbing Engineering. The program turns the traditional four year apprenticeship model on its head with an intensive 18 months of initial institutional training followed by 18 months of paid on-the-job training.

“We had been looking at the process of training and assessment since we became a full trade training provider. We weren’t seeing quality outcomes from the current methodology in our state, so we decided to change the model to improve the outcome.

“In September last year we travelled to Europe to have a look at the assessment processes there which, to a certain extent, was the impetus for this model. The key to this model is that when a student completes the institutional delivery they are guaranteed a job in the apprenticeship scheme,” says general manager Master Plumbers Association NSW Paul Naylor.

The cadetship will deliver five streams of Certificate III in Plumbing, adding roof plumbing to the four streams offered by TAFE. Prospective cadets will undergo a rigorous, multi-stage selection process before being signed up to the program. This includes aptitude testing, Harrison Assessments (a pre-hire assessment toolkit), a practical orientation to plumbing and multiple interviews with both the cadet and their parents.

“Group training companies have similar recruiting processes but I don’t think they’re as exhaustive as ours – we’ve actually increased the extent of the testing that these kids will go through. Because they’re going to come to the college for four and a half days a week for 18 months, it’s important to get the right candidates in,” Paul says.

The 18 months of college will total 1944 hours of delivery, broken down into 864 hours of Certificate III in Plumbing basic theory and practical, 432 hours of Extra Intensive Assessment, 216 hours of Catch Up Time and an additional 432 hours of Industry Training and Observation.

The cost for the college based delivery (paid by the cadets/parents) is slightly more than the Smart & Skilled scheduled fee for the full Certificate III Plumbing course in NSW, but covers full tuition costs as well as the workplace assessment process.

The Industry Training and Observation component is designed to provide cadets with a comprehensive understanding of the industry and the mechanics and systems that underpin it.

“They’ll be looking at how modern technology works in large recycled water systems like Olympic park in Sydney and the sites controlled by Sydney Water.

They’ll go to the Rheem factory and see how hot water services are made. This will endow them with a much broader perspective of what industry does and what plumbing is about. It will show them that plumbing is not just changing tap washers. Because of this broader understanding, they’ll be a lot more motivated to succeed in the 18 months of the apprenticeship,” Paul says.

The key to the cadetship though, and the reason for the allocated 216 hours of Catch Up Time, is the way it is assessed. The Assessment Methodology is a big part of what Paul and his team gleaned from their time in Europe and, as Paul puts it, “introduces the word ‘fail’ to the system,” while adhering  to the maxim: he/she who trains does not assess.

Assessment is made up of four levels and culminates in a 3-4 day holistic assessment on all five streams. If for any reason a cadet should fail an assessment – even if it’s something they’ve passed at a previous level – they will be required to go back to the beginning and start the assessment process from scratch. 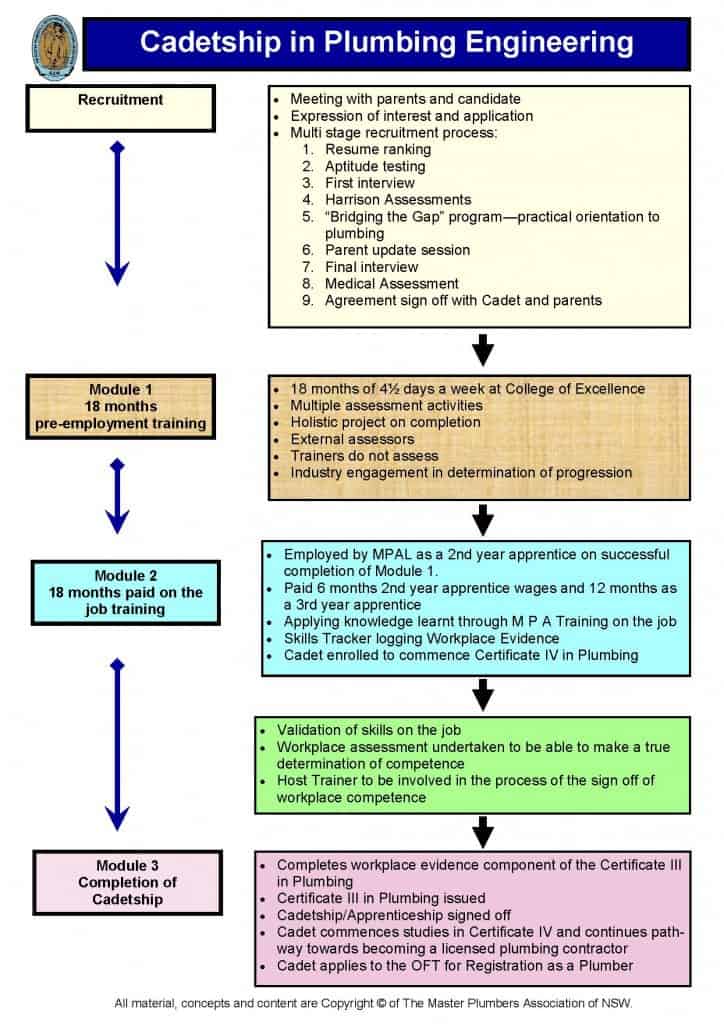 “We’re making up for 18 months of practical training the industry says should be done in the traditional apprenticeship. We think that this will be much harder for these kids to learn so only the cream will rise to the top. The others are just going to have to work very hard and that’s why the make-up time is there.”

At level two cadets are assessed on both theory and practical elements including their knowledge of the standards and comprehension of specifications. Once they pass that, three of the five streams must be completed before level three (which is all practical) can be attempted. If, for example, they fail at level three they go right back to the beginning and start again.

“That’s the repetitive nature of the work they’re being trained to do on a day-to-day basis when they’re working as apprentices. They have to learn those skills, be able to remember those skills and be able to use those skills in whatever task they’re given. Now that’s completely different to competency based training where you can fail a section of the competency and just go back and do that part again. Here it’s part of an overall process,” Paul says.

Once cadets finish the initial 18 months pre-employment training, they’ll work five days a week on site which Paul believes is much more in line with the needs of employers. They’ll then undergo workplace assessments with host employers to get their competencies signed off.

The Master Plumbers College of Excellence will continue to offer apprenticeships in the traditional model and is aware that for some employers that will still be the best option.

“We realise that there will be some employers who want to employ apprentices themselves and run that model – we don’t have a problem with that at all. But the executive committee is pretty convinced that after we finish the first 18 month program and these boys and girls go out to work as apprentices  we’ll see a rise in demand from most employers,” Paul says.