A question of good faith

Paul Cott explores the question: do plumbers and owners have to act in good faith towards each other? 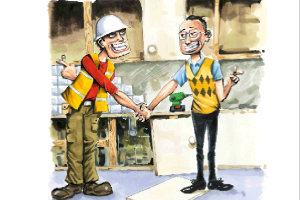 It’s a tricky question to answer. Outside the written obligations under the contract they have entered into, is it each parties’ responsibility to consider the interests of the other party, or are they allowed to act purely in their own self interest? Also, do the parties have to co-operate with each other to make the contract and ultimately, the project, workable?

Ultimately, the question can come down to this: do the parties have to subordinate or lower the importance of their own interests, to the other parties’ interests’?

The fact that the supposed obligation can be stated in so many ways demonstrates that the obligation itself is uncertain when determining what needs or doesn’t need to be done.

The fact that the law differs from country to country also indicates the shifting uncertainty surrounding this area.

Without going into the legal history of the matter in Australia, courts have, on numerous occasions, grappled with this question both within and outside the building industry perspective.

The approach in Australia has been to avoid implying such an obligation for a number of reasons. However it can come down to how willing a court or tribunal is to imply obligations, and it is always a much more difficult task to get a court to imply a term. This is because, in effect doing, what they are doing, is writing into the contract a term that doesn’t expressly exist.

It is however still – and increasingly I might add – a real live issue where a builder or owner has a right under the contract to enforce a legal right, say in regards to a breach of contract committed by the other party, despite the fact that to enforce that right will have an adverse effect on the other party, and even potentially on third parties, whether they can or should legally do so.

Imagine a situation where there is a delay in the project caused by something the builder says is outside his or her control but where the owner alleges the cause of the delay is in fact something within the builder’s control.

Now say the owner is aware of these facts. Is it a breach of the obligation to act in good faith (where as is usual there is no such obligation written into the building contract) to enforce the right to not only claim liquidated damages but also terminate the contract for substantial breach?

The short answer is no and, VCAT for example, in Victoria, would likely say there is a clear breach entitling the owner to terminate and/or claim liquidated damages and if that causes some special loss or adverse consequence to the builder then so be it. The loss must lie where it falls.

They may well feel bound by precedent and say there is no obligation in the particular case to act fairly and in good faith and consider the interests of the builder. In any event, it may say (as courts are often saying) that the obligation to act in good faith is too broad, too uncertain and too ill defined that they cannot apply it as a legal requirement in any event.

The myriad circumstances in which parties may find themselves means that just because the above outcome is in my humble opinion likely, it should not lead one to conclude definitively that a duty to act fairly and honestly does not ever exist.

It can be a case by case assessment and it must be remembered that there has so far been an occasional case where such an obligation (e.g. another manifestation, being an obligation to disclose the existence of – unknown to the other party – critical documents by way of example) has been found to exist.

There is certainly a clear sure trend emerging, albeit if slowly, that courts and tribunals are in fact considering that such an obligation applies in Australian law. But at best it can only really be said in and outside the construction industry, that the obligation at the minute does not exist. But this won’t be the last word on the subject.

While it is less than ideal to not be able to provide a definitive answer to the central question at hand, what has been written in this article is at present the best that can be said in relation to a conclusion. But it is important to be aware of the potential results in any particular case.

What can be said in summary then is that it is best practice to at least consider that the obligation to act fairly reasonably and honestly may apply in the particular contractual scenario you are involved in, even if at this point only, the law is somewhat uncertain.

After all, nobody has ever said to me that they would like to become involved in a ground breaking legal case and establish legal precedent in a high level court, or indeed the High Court! When in doubt as to this issue, it really is best to seek the advice of an experienced advisor. There is just too much legal, financial and reputational risk to do otherwise.

A much needed lesson?