Features
Home›Features›A Charge (pod) will do you good…

A Charge (pod) will do you good… 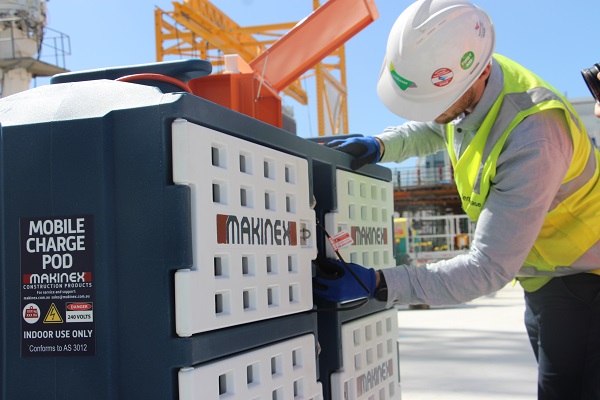 Construction sites are busy places and one of the biggest challenges is ensuring that workers can charge their tools safely and efficiently. A new invention, the Mobile Charge Pod moves the goalposts for the modern site. Anna Hayes finds out more.

Your battery is dead – it’s a common complaint, it’s annoying but hey, your Uber is already on its way, and you’ll be home in a few minutes to plug the phone into the wall.

But imagine your battery is dead when you’re trying to drill some building structures or framework into place – that’s a bit more disruptive than a dead phone or silent headphones. What’s more is that when you wander off to plug in the charger, you can’t find a socket, giving you the choice of either waiting or overzealously pulling the plug on someone else, probably in the same boat as you.

Not only is on-site charging a potential argument-inducer, it’s also not the safest from either a safety or security point of view.

Jason King is the project director at the Integrated Acute Services Building for the Prince of Wales Hospital who, with the support of Lendlease’s annual innovation accelerator program ‘Launchpad’, came up with the idea of the Mobile Charge Pod.

Jason explains: “During my career, I have seen first-hand some of the challenges faced by our trade partners to keep their power tools and valuable equipment both charged and secure. Workers would leave cordless tools on charge only to find the next day that some were missing.”

Traditionally, tradies would use a temporary power board, plug their charger in and walk away – they might come back an hour later to find someone has swapped out their plug or, worse again, the piece of equipment is gone.

Jason says: “It was a daily one, but there was no solution to it. There was always an idea in the back of my mind, a voice saying that we should try to fix that.”

In addition to that, tool theft is a huge problem and given the technology in some power tools now, batteries or chargers are expensive to replace if they go missing. Some equipment, Jason says, now comes equipped with sensors that can actually identify who takes a tool and where they go with it.

“The whole point of the Mobile Charge Pod is that you can lock the tool and the charger away and you’ve got peace of mind.”

The Mobile Charge Pod is, essentially, a set of lockers with sockets on the outside of said spaces where tradies can secure their tools while adhering to site safety in terms of sockets and plugs being available for inspection. Its mobile nature means it can be put anywhere on site, as and when it is needed.

A number of units have been distributed across the country so far and, in what is as good a pub test as any, one unit that was placed without explanation on a busy site was full by the end of the day as tradies took notice, realised what it was, and immediately began to use it.

Kate Nelson is the head of innovation in building at Lendlease and she says that Jason’s idea has solved a very real problem very efficiently.

She explains that ‘Launchpad’ is an innovation accelerator program run in partnership with Stanford University’s famed d.school, the aim being to support and nurture innovation throughout their business and provide guided opportunities to internal innovators like Jason.

“Jason had the idea of the Charge Pod in his head for a couple of years. But until Launchpad came along, he hadn’t yet brought it to life. Launchpad provides our people with not only the support, but the resources and pathways they need so that any seed of an idea is given its best chance to flourish.”

Patents have been lodged in Australia, the Middle East, and internationally for a product that is, as Jason says, like nothing else on the market. The company teamed up with Makinex for manufacturing and Jason says that as technology evolves, so too will the product they are offering.

Jason’s mission was and continues to be clear: “It was about finding a safe and secure solution for the industry and we’re thrilled to see hundreds of the Pods being purchased and used on construction sites across the board. I’m proud of finding a solution but also coming up with a product that the industry can use knowing their tools safe.”