The strength in the nation’s real estate market is proving good news for those in roles supporting the property industry, as new SEEK job figures show a heightened labour demand for roles in the Trades and Services sector.

Strong property prices, and record low interest rates, are boosting the real estate market, in-turn driving a 13 per cent year-on-year growth in new job ads within the Trades and Services industry across Australia.

Managing Director of Employment at SEEK, Michael Ilczynski, said the demand for labour  was excellent news for those with trade skills as the number of opportunities for employment has seen significant growth, particularly in eastern states.

“New job ads in the building industry, in particular for gardeners and landscapers, plumbers, builders, carpenters and cabinet makers, are in highest demand compared with other trades like welders and boilermakers, butchers, fitters and turners and automotive workers.” 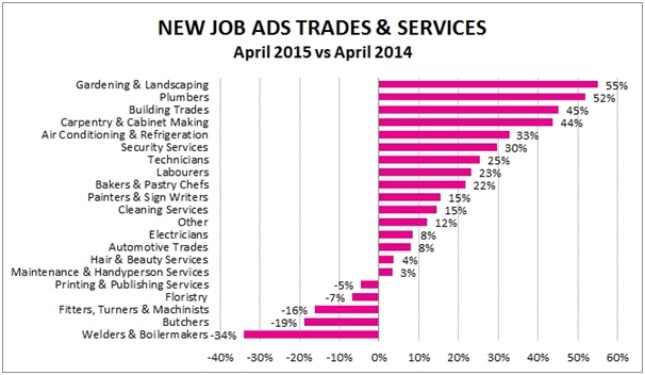 “This has been further strengthened by commercial construction as well as state and federal governments’ investment in infrastructure projects. This has seen projects move from the design phase in to the build phase, placing more demand across the board on the building trades sector from construction through to finishing roles.

“Demand is high across the board from bricklayers, plumbers, framers and electricians to plasterers, painters and landscape gardeners. And we do not expect demand to decrease in the short to mid-term, the further reduction of interest rates in May is likely to stimulate more investment in property,” Mr Shepherd said.

The demand for Trades and Services by state also highlights the geographical divide in the Australian economy.

“The non-mining states have each seen significant increases in demand for Trades and Services over the past year, no doubt reflecting the strength in residential construction, particularly high density housing in Melbourne, Sydney and Brisbane,” Mr Ilczynski said.

“Meanwhile the mining states have generally recorded weaker demand for Trades and Services, which are likely reflecting reduced labour demand as major projects complete and mining companies cut back on capital and operating expenditure, on the back of lower commodity prices.”

“April saw the largest monthly increase since July 2010, when the labour market was recovering from the global financial crisis” Mr Ilczynski said.

At a state level we continue to see the non-mining economies driving the growth. New South Wales new job ads are up 5.8 per cent month on month and Victoria new job ads up 5.7 per cent.

Queensland, while exposed to the resources sector, but to a lesser degree than Western Australia, bounced back strongly up 4.4 per cent month-on-month. This more than reverses the three per cent fall recorded in February following the Queensland election result. South Australia new job ads increased 2.9 per cent while advertising in the Australian Capital Territory again surged 11 per cent month-on-month, to be 34.8 per cent higher than previous year’s figures.

Western Australia remained relatively unchanged, up just 0.4 per cent. Tasmania recorded a small fall in new job ads after a run of generally strong growth in the past 12 months. 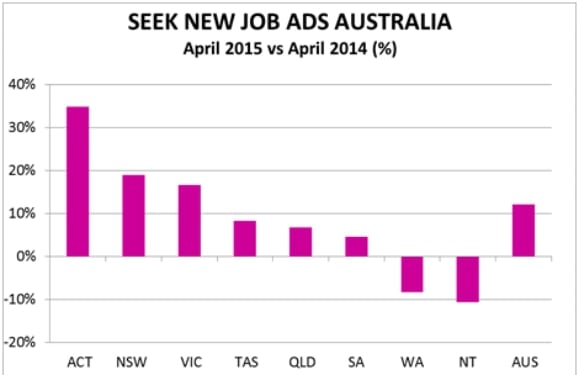 The Australian economy is experiencing an ongoing divide between the demand for housing and the weakness in resources and associated sectors, which is reflected in the job ad data, according to Mr Ilczynski.

The April data shows strength in property-related sectors Design and Architecture, with jobs up 39 per cent; Construction up 18 per cent; and Trades and Services up 13 per cent year-on-year; but weakness in Mining, Resources and Energy revealing a 38 per cent dip, and Science and Technology down 11 per cent.

The IT sector, an industry that generally leads other sectors, showed a 23 per cent rise in April, continuing the steady run of growth seen in recent months.

“While a relatively small advertising group, the continued growth in Farming, Animals and Conservation suggests some overall strength in agriculture, notwithstanding some areas of the country continuing to experience severe climatic conditions,” he said.

The SEEK Employment Index increased 1.4 per cent in April 2015, which means that there is now greater opportunities for jobseekers as there are less applications per role than in previous months.

The Index increased in New South Wales 2.5 per cent and Victoria 2.7 per cent, but remained relatively unchanged in Queensland (-0.1 per cent), and fell in both South Australia 3.4 per cent, and Western Australia 1.8 per cent.