Terry Nguyen discusses the rise in thermostatic mixing valves around the globe and why thermostatic shower mixes have barely surfaced on our shores.

Many seasoned travellers would have noticed their favourite international hotels throughout the years change from traditional taps, to single lever mixers and now to new sophisticated temperature controlled valves. However, this new trend has not yet found its way to our Australian equivalent hotel chains. The reasons aren’t in the hotels themselves but the differences in Standards between countries. 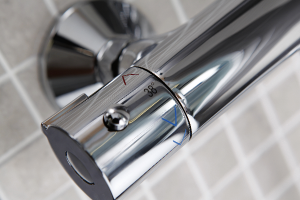 Thermostatic mixing valves do not suffer from the same problems so when a temperature is selected it will be delivered regardless of what the inlet conditions are. The new style of shower mixers could also put a sunset on the cliché television sitcom scenario where a shower occupant screams from a short jet of hot water when a nearby toilet is flushed.

New thermostatic shower mixers are becoming the staple for all new installations in most international countries, and also on large cruise ships. Evidence of this can be seen in all major hotel chains in many parts of the world. An on/off valve controls the flow of water and a separate dial marked with temperature set points provides a universal language for all hotel guests to easily understand.

The reason thermostatic shower mixers have barely surfaced in Australia is the manner in which they are assessed for WaterMark certification. In Australia a thermostatic mixing valve has always been seen as a safety valve to control heated water supply to outlets. Controlled outlets are those typically found in hospitals, aged care facilities, nursing homes or other areas where a user is in need of additional protection against scalding.

The valve design provides protection against fluctuating inlet conditions and will even isolate the outlet completely if cold water supply is interrupted. The valves work extremely well for their intended duty but this does come at a cost.

Due to their sensitive nature thermostatic mixing valves have an onerous testing and surveillance regime to make certain safety levels are maintained.

The testing includes all conceivable scenarios which could potentially cause a risk of scalding. Inlet temperatures and pressures are carefully monitored, adjusted and interrupted to determine what effect is noticed at the outlet of the valve.

The outlet temperature is monitored and recorded using precision high speed data loggers to check how quickly the valves can react when abrupt changes are made to inlet conditions.

Any temperature excursions are analysed for both magnitude and duration, where the product of the two values determines the scald potential. High temperature spikes are only allowed to exist for fractions of a second, where lower spikes can be tolerated for longer periods of time before they’re considered a threat.

The valves are put through a long endurance life cycle test and must still meet the strict scald prevention requirements of the Standard at the end of their life expectancy.

Furthermore the Standard also mandates that 100% of all valves constructed must be factory batch tested for correct function before they can be offered to the market.

The combination of testing and surveillance of thermostatic mixing valves has made their use in regular domestic applications fairly cost prohibitive. While this is essential for valves destined for our hospitals and other care facilities, there are those who argue lesser screening could be justifiable for valves that are simply used in standard bathroom products as the means for temperature adjustment.

Most new age shower mixers using thermostatic mixing valves are used (internationally) in standard applications where no additional protection against scalding is needed. If a separate class of thermostatic valves used in bathroom products had testing and surveillance regimes more suited to their finished applications, it could be the trigger needed for the introduction of these products in our Australian plumbing industry.