Vacuum toilet technology has been around for decades, but until recently has mostly been confined to use in planes, boats and correctional facilities in Australia due to a lack of standards and codes pertaining to their installation. Now that this has changed in 2016, the vacuum toilet market is tipped for a bright future. Justin Felix reports.

If you’ve ever used the restroom on a plane or boat you would have noticed something a little out of the ordinary with the toilet. That’s because they are fitted with vacuum toilets rather than the traditional toilets you have become accustomed to installing in the built environment. Rather than a rapid influx and swirl of water, vacuum toilets use the combined energies of vacuum pressure and gravity for the collection, conveyance and disposal of waste through a piping network that can be routed above ground. Vacuum drainage systems consist of three main components: a vacuum generating station, a conveyance system and individual collection points.

Toilets are connected to a vacuum piping network via a normally closed vacuum interface valve, which acts as a point of separation between constant vacuum pressure in the waste piping network and atmospheric pressure at the toilet bowl. When the flush valve is activated, the controller opens the interface valve. The pressure differential causes air to enter the toilet bowl and pull the waste through the fixture outlet before transporting it into the piping network, routing it to the vacuum centre. The controller also activates the flush water valve for rinse and re-fill of the bowl. The opening and closing of the interface valve is precisely controlled so that all waste is completely removed from the bowl. A flush is completed using less than a litre of water and any odours or bacteria are removed from the bowl.

Vacuum drainage technology is not new and untested by any means and made its name in marine and aeronautical industries in the 1960s. These specific industries had a direct cost involved with carrying large volumes of water for flushing and waste water so an alternative method was required. 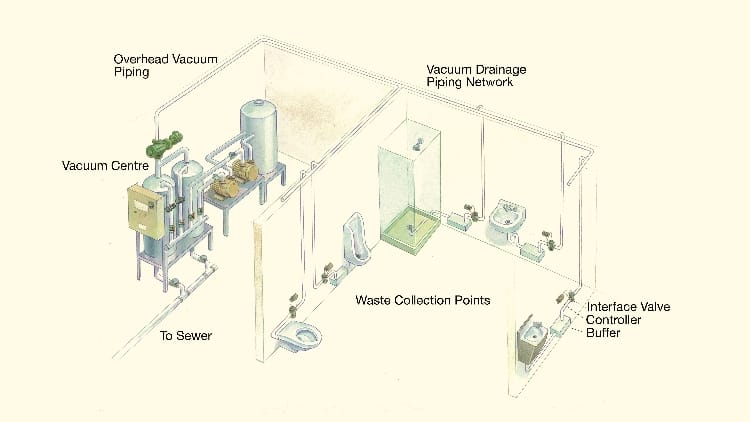 Around the same time vacuum technology started to be used by sewage utility companies on land to take sewage from pits of which one or more homes with traditional drainage might drain to.

Sylvania waters in Sydney is an early example, where the topography (flat reclaimed land on the coast with high water table) made traditional drainage very expensive and near impossible. It moved inside Australian buildings in the early 1990s with a specific need in the correctional and retail building market.

For a number of years now several companies have been providing vacuum systems in Australia; however they haven’t been able take their products mainstream due to a lack of a deemed-to-comply AS3500-type code. This also meant vacuum toilets couldn’t achieve a WaterMark as there was no code to test them against.
This, in turn, resulted in a degree of resistance toward specifying vacuum solutions in the market, due primarily to the conservative approach by many specifiers, who wouldn’t accept them under the Plumbing Code of Australia’s alternative solution for installation approval track. This in itself is quite understandable once you consider the sizeable investment required in such a building-wide hydraulic system.

Through hard work, persistence and a lot of time and effort, this has now changed and the tide has begun to shift in favour of the suppliers.

In July 2011 the Plumbing Product Industry Group (PPI) offered to assist with establishing a special interest group to begin drafting a code. The PPI secretariat worked with the special interest group to lodge applications for WaterMark Technical Standards with the Australian Building Codes Board (ABCB) earlier in 2013, while at the same time gaining acceptance from Standards Australia for the funding of a project to publish an installation code for Vacuum Drainage within Buildings.

While it’s been a long journey the new Standards Australia Technical Standard SA TS 100:2015 Vacuum WC pans and interface valves intended for use with vacuum drainage systems and designs has been developed. This is the first Standard for Vacuum Toilet Technology in Australia and NZ and the Installation Standard is not far behind.

We caught up with managing director RBA Group and chair of committee Marc Buman to find out how the development of the Standard came about and what it means for the future of vacuum toilet technology in Australia and the plumbing industry as a whole.

“We now have a code that we can WaterMark our vacuum toilets against and AS3500.2 (Installation Code) for Deemed-to-Satisfy solutions under the PCA has been published for public comment in regards to the addition of vacuum drainage but it’s not completely over the line and published as a document,” Marc says.
“The committee ran under the umbrella of the PPIG and the special interest group within that, which relates to vacuum drainage, has four companies involved: Avac, HI Fraser, Vacuum Toilets Australia and WC Innovations. We have all been involved from the outset.”

It’s important to understand that standards don’t just happen by chance. A lot of time and effort goes into their development and it can be a long journey for all involved. In this particular instance, the four manufacturers have invested an enormous amount of time and money to make it a reality.

“PPIG has helped facilitate the meetings by providing funds for physical spaces to meet; however, we as the manufacturers have all covered the travel costs required to get us all in the same room.

Standards Australia picked up the project and dedicated its own project manager to oversee proceedings; however, all of the drawings and content came from the four interested parties. The journey has spanned five years and hasn’t come without challenges.

“I’m optimistic that the challenges we faced won’t be as severe for those trying to achieve the same sort of thing because we have pointed out a lot of holes that have evolved with the transition of the WaterMark scheme and the Australian Building Codes Board (ABCB) running the Plumbing Code of Australia (PCA) and the likes.

“We came in with our project early on in that process and faced a lot of challenges that Standards Australia and the ABCB are now aware of. With that in mind, you would assume that if suppliers came along today and made the same sort of applications that we did, Standards and the ABCB would make recommendations and suggestions earlier on in the process,” Marc says.

Now that the Deemed-to-Satisfy solutions under the PCA has been published for public comment, the market for vacuum toilets is set to expand beyond the confines of planes, boats and correctional facilities. 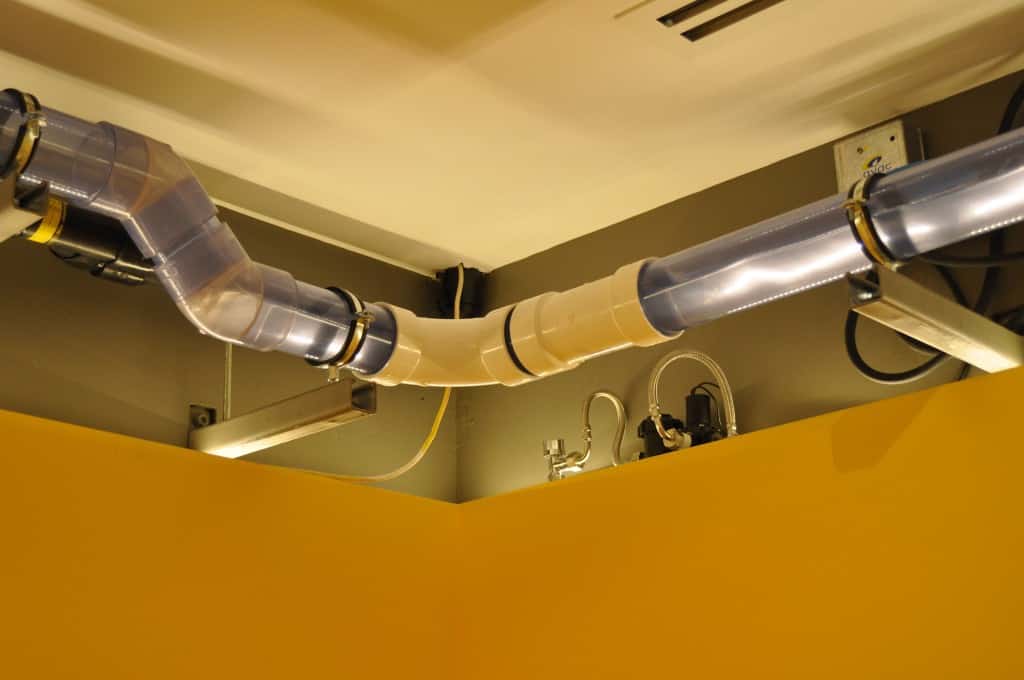 Suppliers expect there to be a higher degree of commercial take up as specifiers acknowledge the benefits that vacuum technology presents. Some of these benefits include, but are not limited to, the following:

– Allows for cheaper building re-use as drainage can go up and around obstructions that may make traditional 1:60 drainage difficult.
– Toilets use less water: between 800ml-2L for a full flush
– Less blockages in environments where deliberate misuse of a drainage system is likely or common such as shopping centres, sports arenas, and correctional centres.
– Centralised plant on large campus sites where there might normally be many pumped wet wells.
– The ability to take drainage up and therefore contain all the services of a single floor within its floor space and negating the need to service one floors drainage in another floors ceiling. This is particularly advantageous in retail, where one retailer wants to add drainage points but sits in a shopping centre directly above another tenant such as a bank where there may be security issues.
– Vacuum sewerage systems can be retrofitted to allow additional fixtures to be installed to cope with demand increases.

A bright future
The collaborative effort of all four suppliers, in conjunction with PPI Group and Standards Australia has really opened the doors to vacuum toilets, and if the adoption of the technology overseas is anything to go by, there should be many more installations around the country over the next few decades. Vacuum Toilets Australia marketing director Carolin Grimm explains that some big projects have already been completed, with more on the horizon.

“Vacuum toilets are an advanced Ecologically Sustainable Design (ESD) that has been in use in multistorey buildings internationally for a number of decades. With the gaining of the first WaterMark for Vacuum Toilets, the benefits of the system can now be fully realised in Australia and New Zealand.

Vacuum Toilets Australia, a Western Australian based company, markets the Norwegian Jets Vacuum Toilet Systems and was the first Australian supplier to achieve the WaterMark.

“We installed a large system in 2009 in the Melbourne Water headquarters at 990 LaTrobe Street in Docklands as well as the Pixel Building where new technologies are showcased. Additionally, we have installed the system into the Historic ‘Legion House’ at 161 Castlereagh Street in Sydney and the event industry has adopted the system across Australia and New Zealand,” Carolin said.

“With ongoing projects in Sydney, Melbourne and Perth, the company is poised for expansion.”

In order for the implementation of vacuum technology to be successful on a broader scale requires plumbers to be up to speed when it comes to best installation practices and as Marc explains, this is a key area for Avac Australia.

“Training is a very important facet. We have a fully set up classroom/hands on environment up in Brisbane. Once the codes are published we’d like to work with the likes of PICAC in Victoria and the Master Plumbers across the country to work on ensuring current and future contractors are exposed to this kind of technology.”

Backflow Prevention in the everyday world