With a growing need for solar hot water repairs and a lack of knowledge circulating in the industry, we’ve enlisted the help of solar repair expert Mathew Briggs to start a column dedicated to making the job easier for you.

Solar hot water heating is not new technology. In fact, it has been available in Australia for decades through well known companies like Solahart, who have been producing solar hot water heaters for more than 60 years.

The technology associated with this style of heating has advanced though. Over the last several years, we have seen the introduction of evacuated tubes and hot water heat pumps, along with new flat panel technology in various combinations. It is a continually changing market sector and as products become more efficient, higher temperature components are being developed to keep up with the heat generated by modern-day designed solar hot water heaters.

The introduction of solar hot water rebates and the small scale renewable energy scheme accelerated the industry some years ago. Rebates and STCs could in fact be be calculated as high as $2700. On a national average government incentives could cover up to 40% of the system’s purchase price; however, in some cases, depending on the manufacture, the percentage could be a lot higher. The incentives for the average Australian to buy solar hot water was increased over a short period of time which meant that the incentives for new manufacturers to make a quick dollar was also increased. The increase of solar hot water installations was so high in fact that a special licence for plumbers installing solar hot water systems was introduced to ensure installations were of a similar standard. Between 2010 and 2011 alone the number of models of solar hot water systems with a capacity of 700L or less registered for STCs (RECs at the time) and government incentives exceeded over 2500 models! 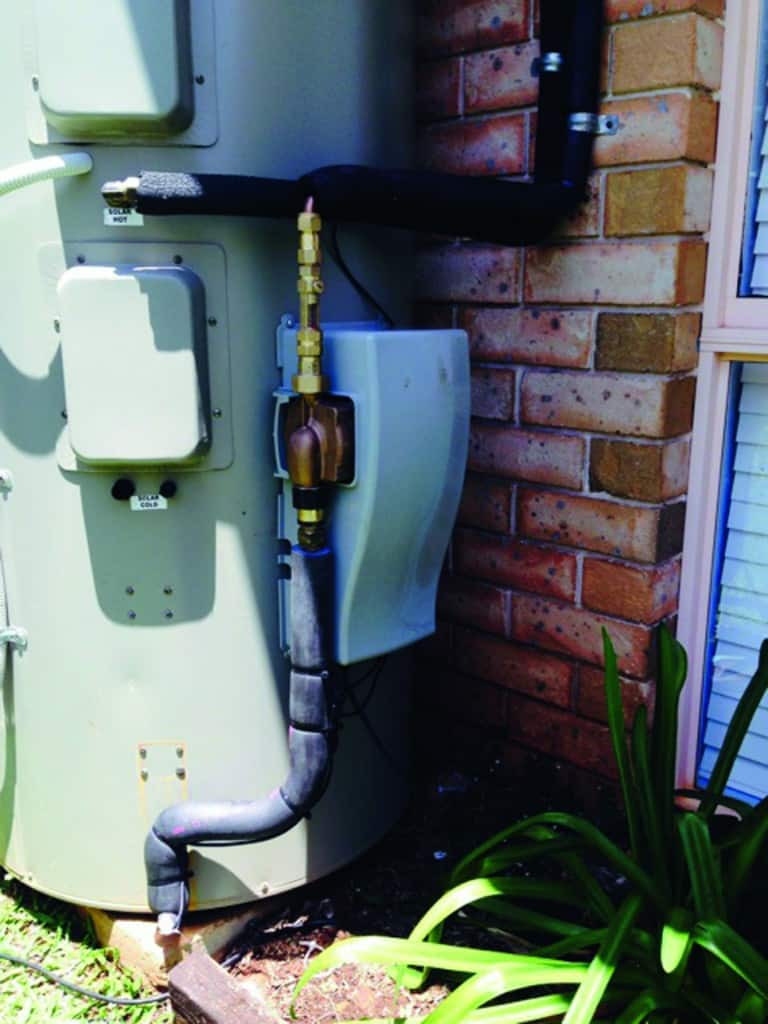 Some system designs from around the peak of the government incentive were pretty basic. The newer manufactures seemed to take a similar approach of fitting imported collectors to Australian WaterMarked hot water systems, adding a pump and some form of controller. It was simple and allowed high turnover of product. This basic way of designing a system came with its various problems though. These included: circulating pumps without covers installed outside; solar tank porting issues for flow and return lines; sensor port positions or lack of any sensor wells. Some sensor wells were positioned as little as 80mm into the cold water inlet, some were strapped to the pipe work, while others simply placed between the hot water cylinder in its outer casing.

The area of warranties for systems became a fierce battleground for some manufactures as new manufacturers entered the market. Tanks and collectors were offering 5, 7, 10 and 15 year warranties. Unfortunately, basic components could have as little as two years warranty, which most customers would find out later. When the system had stopped the component warranty period was no longer effective. The other issue with these warranties, as people are starting to find out, some manufactures no longer exist. They left with the government incentives.

There are just some of the contributing factors that force some plumbers to shy away from solar hot water repairs.

PROFITING FROM SOLAR HOT WATER REPAIRS
Solar hot water service and repair work is beginning to increase; however some plumbers are choosing to stay away from solar repairs because of the lack of information available regarding how to fix the problems. The fact is, there is plenty of sales information available but a relatively limited amount of repair information exists. Solar hot water repairs can be simple if you stick to some basic rules. Over the next few issues of Plumbing Connection we will highlight some of the problems associated with repairing solar hot water systems and ways to overcome them.

The average lifespan of solar hot water components, circulating pumps, solar hot water controllers and sensors used in some of the earlier systems tends to be around 3-5 years, sometimes a lot less. The way solar hot water systems were designed 3-5 years ago by the smaller brand name manufactures, makes repairs and servicing tricky. The first mistake that can be made by the majority of people, is wanting to replace like for like parts, when there is a better solution often at a cheaper price in the long run.

Charging for repairs can be a difficult process mainly because of customer expectations not being met. Some customers may be up for $1000 in repairs when they only paid $500 for their systems. Similarly, some may be under the impression that their system is still under warranty. Others may be anxious because their hot water has stopped and they have paid good money in their new system, believing it would last longer than their previously replaced hot water cylinder. The salesman forgot to tell them their new system is more efficient but will need servicing with components replaced after time. Just like a car, solar hot water systems require servicing too.

With this in mind, some basic techniques for approaching solar hot water repairs are needed.

The best way to deal with customers is to provide them with a few options based on the scenario at hand. Give them as much information as possible and let them decide.

I have used this approach with success on many occasions when going to a job to fix a system that has stopped working. Often the system has no digital controller and a pump that has been installed outside in the harsh elements. I’m often unsure how long it has been since it last worked.

I generally inform the customer of the cost to repair the system with a complete pump station first before providing an alternative, such as replacing the solar components with the latest technology on the market. I also explain to the customer that with this option they will know when a problem occurs by looking at the temperatures on the controller regularly and observing the flow. With the older systems you cannot see any signs of things going wrong until they stop.

Unfortunately, it means that the system could have been broken for some time before the customer has realised.

Following this, I then offer some cheaper options, explaining that because of the age of the pump and valves I cannot guarantee they are working correctly, even though they turn on. I suggest that we can start by replacing the roof sensor first, then the pump and then the controller if need be. I do explain that in the long run this will cost them a lot more as nothing lasts forever.

I give them separate pricing on the roof sensor plus installation, controller plus installation as well as a price on pumps and valves so they have all the information to make a decision from. I once again reiterate that I can fix the system 100% with the pump station as I know it gives the customer the best possible result for their system. It also means I make reasonable margins on the product. With this being said, I also know that if the customer simply chooses to replace the roof sensor and the system fails in a week or month, I can comfortably charge to go back and replace the pump or controller if it needs it.

By taking this type of approach I know I can go to any solar hot water repair and be paid to fix the system.

Another good tip is to always ask the customer to send you a picture of the controller as these really are the key. If you know what controller was used with the system you will know what sensors to use and how to fix the system before you get there. This will save you time and the customer money. It will also give you time to call the customer back with the times that you are available to fix their system. If they call while you’re in the middle of a job this is handy.

It will also allow you to provide the customer with some information on the system they have and other possible problems associated with that system and controller before you arrive. 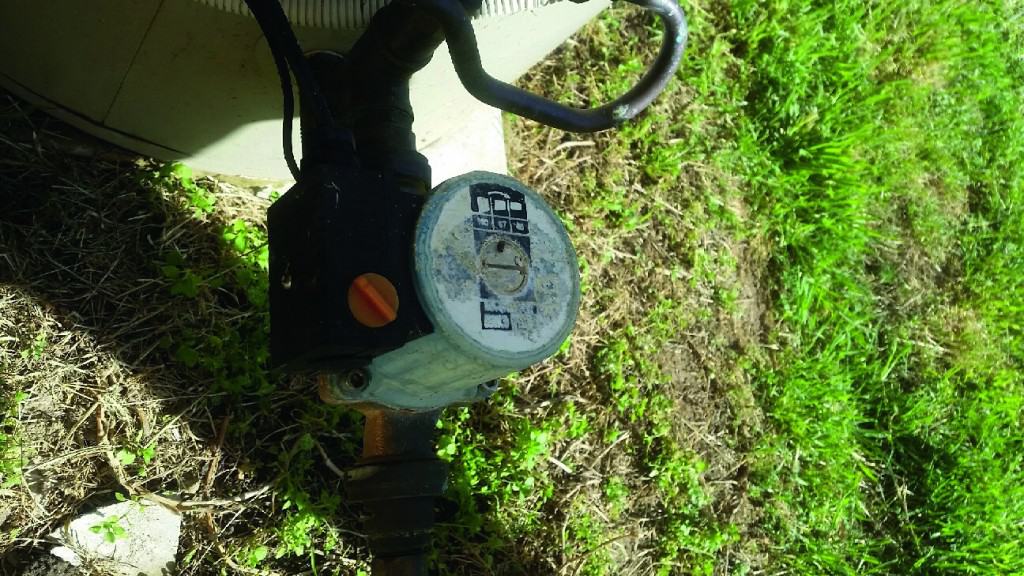 PUMP STATIONS
A complete pump station with digital controller is one of the best tools any plumber can carry in his truck. They can be used as a kit for a job or be broken down and the parts used, then replaced after each job. This means plumbers who don’t repair a lot of solar only need to carry minimal parts.

You need to find something that consists of a good UV proof pump station housing. You’ll need a good solar pump like the Grundfos 15 20 CIL with either a RESOL or Senztek solar controller featuring a digital display and sensors that can handle high temperatures, including all new valves non return and flow meter. As an example, we sell complete pump stations on the website in the trade section for around $500. Plumbers sell them for $700-$800 plus labour so there is a good margin to be made.

In the next edition we’ll talk about tank sensor placing, compare solar hot water controllers and look at a solar hot water circulating pump.
Mathew Briggs is a commercial plumber and director of www.solarhotwaterparts.com.au – specialising in solar hot water replacement parts for all systems.