A clever siphonic roofing solution from Geberit has reduced rainwater drainage piping by up to 90% in Wollongong Hospital’s car park redevelopment.

To support the population growth in one of NSW’s largest regional cities, Wollongong Hospital was allocated $30.5m by the NSW State Government to construct a new multi-deck car park.

The facility, which features more than 750 new parking spaces, is connected to the existing car park and to the hospital via a footbridge, and will see the overall number of parking spaces double to around 1500. Located on New Dapto Road, the car park sits adjacent to the recently completed Wollongong Hospital redevelopment project, which included an extension of the emergency department, the creation of a large ambulatory care centre and a new elective surgery centre.

Taking approximately 12 months to complete construction, the project has been a significant undertaking by the NSW Ministry of Health, which appointed Health Infrastructure to oversee its delivery. AW Edwards was awarded the contract in 2014 and went on to engage DM Plumbing as the hydraulic subcontractor. Together with Geberit and an extended team of additional trade subcontractors the project was completed in May 2015 and operational in June.

“The community, Council and State Government all recognised parking had become a challenge at the hospital – particularly since its expansion into a teaching and referral hospital with the coming of University of Wollongong’s graduate medical school,” DM Plumbing Project Manager, Troy Williams says.

As one can imagine, a project as big as this, does not come without challenges. Fortunately, through innovative product and good design, those challenges were not too great to overcome.

The Building Challenge
Keep penetration through the concrete slabs and roof outlet drains to a minimum.
Maximise site capacity and avoid sacrificing car spaces with an alternative drainage system that can be fitted without gradient.

Maintain clearance heights with pipes that can be installed with minimal to no fall.
Reduce the possibility of damage to the pipework in high traffic areas.

The Solution
A lot of plumbers would be aware of the fact that downpipe systems can be inefficient when discharging water from roofs, as water spirals down around the inner walls of the pipe with an air column in the centre. By using the siphon principle, Geberit siphonic (Pluvia) system uses almost half the size of a conventional pipe to remove huge amounts of rainwater from roofs to a discharge point. When the water column builds up underneath the roof outlet, air is eliminated from the system to enable the rainwater to be sucked through the pipework under negative pressure. 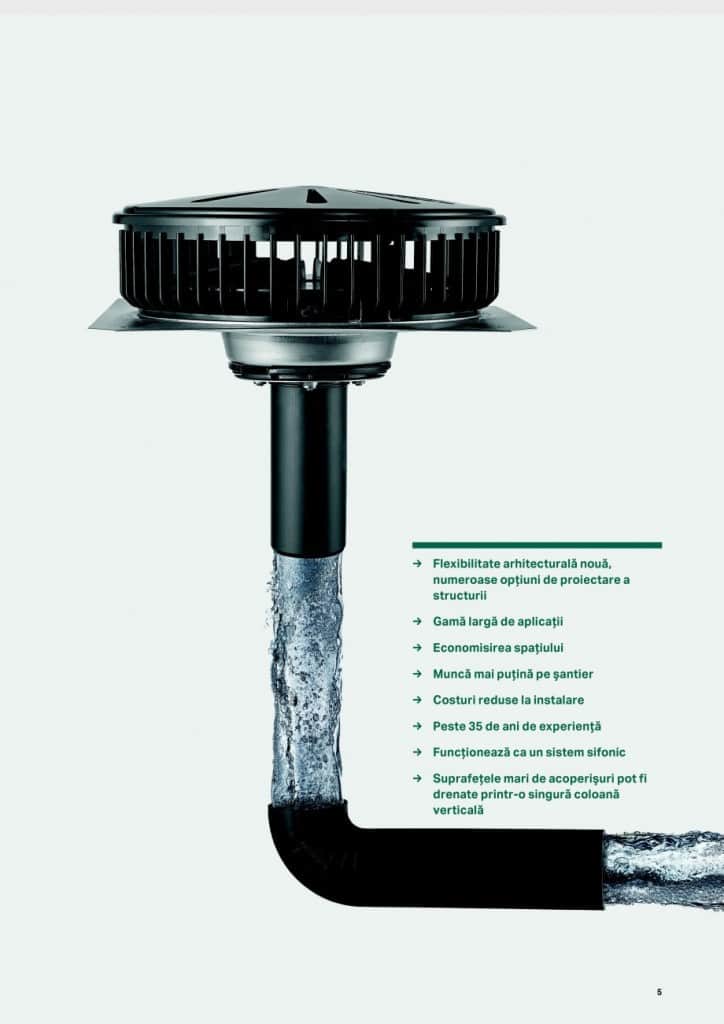 Geberit’s approach to the Wollongong Hospital project involves the combination of its Pluvia roof outlet and its robust HDPE (High Density Polyethylene) pipes to increase the capacity per outlet, flow velocity within the system and efficiency of water drainage.
“Geberit’s innovative piping system appealed to us as it significantly reduced the number of pipes from 26 to just 2 which was one of the determining factors in us winning this contract. They solved our construction, practical and design issues,” Troy explains.

“Geberit’s siphonic system operates at a higher discharge capacity (up to 300L/s with roof outlets and up to 100L/s per outlet and with fewer roof outlet drains. This means the HDPE pipes associated with it can be laid with minimal to no fall and routed to a single downpipe.

Manufactured from High Density Polyethylene, Geberit’s HDPE piping is significantly stronger than typical PVC pipes. As the solution uses fewer pipes it meant fewer bollard or protection systems against car park accidents. This sees a reduction in maintenance costs in the long-term, which is a win-win for car park users and hospital management.

“Both Geberit’s HDPE pipes and Pluvia outlet are significantly smaller than traditional systems, meaning coordinating the installation of the other services was far easier,” Troy says.

“Geberit’s siphonic system saved us, and our client, up to 500m of pipe and more than 200 hours of labour.

“In a matter of days our 2D drawings were transposed into a 3D schematic model and we had a tailored solution that considered our individual site, design, functionality and construction constraints,” Troy says.

The next time you’re faced with a stormwater drainage job… you might suggest Geberit’s Pluvia System siphonic too.

Get the sub-meter running