An outbreak of COVID-19 at a high-rise building in Hong Kong has drawn focus the importance of proper plumbing regulations which, employed correctly, can help to limit the spread of the virus in such environments. Anna Hayes reports. 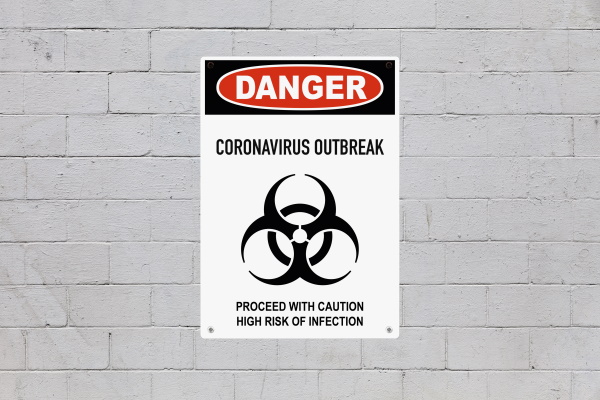 Warning sign screwed to a brick wall to warn about a health hazard. In the middle of the panel, there is a biohazard symbol and the message is saying “Danger, coronavirus outbreak. Proceed with caution, high risk of infection”.

With the world on high alert as the new coronavirus COVID-19 becomes more widespread, two plumbing industry professionals have weighed in on concerns surrounding substandard plumbing – something that has been implicated in the spread of the disease in Hong Kong.

While information has been limited, professionals say it is clear that transmission paths that would allow for the virus to spread between individual units in at least one high-rise apartment block, have been identified. A similar problem occurred in 2003 with the outbreak of SARS which resulted in the publication of The Health Aspects of Plumbing by the World Health Organisation and the World Plumbing Council.

The virus is primarily transmitted through droplets from an infected person’s cough, and distributed as aerosols to be inhaled or deposited on surfaces where it can then be transmitted by touch. The outbreak has resulted in shortages of items such as hand sanitiser and surgical masks, as well as paracetamol products and, most amusingly, toilet paper stocks.

But it has also raised concerns over plumbing standards and how they stack up when it comes to fighting the spread of the virus.

Pete DeMarco is the executive vice president of advocacy and research at the International Association of Plumbing and Mechanical Officials (IAPMO) and he explains that high-rise buildings present unique challenges in plumbing design.

When faecal matter and wastewater are discharged into the vertical ‘drainage stack’ pipe, it creates pressure changes within the pipe. The wastewater descending the stack will push air down ahead of it and drag air behind, creating pressure that can affect trap seals by either siphoning the water or pushing the water out of the trap.

“A second vertical pipe, called a ‘vent stack’, typically runs parallel to the drainage stack and introduces air into the drainage stack every fifth floor to avert excessive changes that could deplete trap seals and allow contaminated air and aerosols to enter apartments on other floors.”

It appears, he says, according to the Associated Press, that a 2016 change in the Hong Kong Housing Department policy has laid the way for tenants to alter their bathroom pipe design without need for inspection by a plumbing official.

“In one of the apartment units, the vent pipe was completely disconnected inside the bathroom, apparently by the occupant, which provided a pathway for contaminated air to enter the apartment, especially when the bathroom ceiling fans were activated.”

He points out that every time the Plumbing Acts and regulations are reviewed, there are some who want to open plumbing work to the non-regulated and untrained, but says that it is unlikely that any plumbing system installed and maintained to current standards and regulations would allow the transmission of any virus between floors.

However, he also refers to the Building Confidence Report which suggests that oversight and certification in new construction has slipped.

“At the time the report was published, there appeared to be reluctance to improve it. This, coupled with the fast track contracting and construction methods employed today on major projects lead to an installed system that does not relate to the original design or specification further leading to a likelihood of failure.”

He adds: “BCR Recommendation 16: ‘That each jurisdiction provides for a building compliance process which incorporates clear obligations for the ongoing approval of amended documentation by the appointed building surveyor throughout a project’ will, if implemented, provide a basis for Registration of Design that could provide the building owner with some satisfaction that he received the building and its services originally expected.”