Reactive soil and how to ensure plumbing and drainage is compliant

The type of earth that foundations are laid on can have repercussions for your client’s dwellings and the plumbing and drainage systems that service them. Plumbing connection investigates the issue of reactive soils and what measures to take to ensure plumbing systems stand up to the forces of Mother Nature.

The term ‘reactive soil’ may conjure up images of radioactivity beneath the earth’s surface, however reactive doesn’t indicate that the soil is contaminated in any way, rather; it refers to the way it reacts to changing moisture content.

All clay-based soils have the potential to change volume and shift with changes in the amount of moisture in the soil – and are sometimes called ‘reactive soils’ because of this.

The amount that soil is likely to shift defines how ‘reactive’ it is considered to be.

Some soils have a greater potential to change volume than others, and this amount of potential needs to be measured with a soil test to make sure footings are designed in a way that helps protect it from soil movement that might otherwise cause it to sink or buckle.

So, while it is often assumed that homes are built on solid ground… this may not always be the case.

The issue of reactive soils is a national one, though it really came to the fore in Victoria during the drought that ran from 1996-2009 with new homes that were experiencing settlement. Rain wasn’t falling, grounds were excessively dry and as a result, soils contracted and walls began to crack. And then the rains came, bringing with it myriad other issues.

Swinburne University has been conducting research in the area of reactive soils to try and better predict the performance of houses and how we as a nation can improve house and plumbing designs that better resist moving. A consortium was formed including the Victorian Building Association (VBA), Office of Housing, the Association of Consulting Structural Engineers Victoria (ACSEV), the Foundation and Footings Society Victoria (FFSV), Housing Engineering Design & Research Association (HEDRA) and Swinburne University. 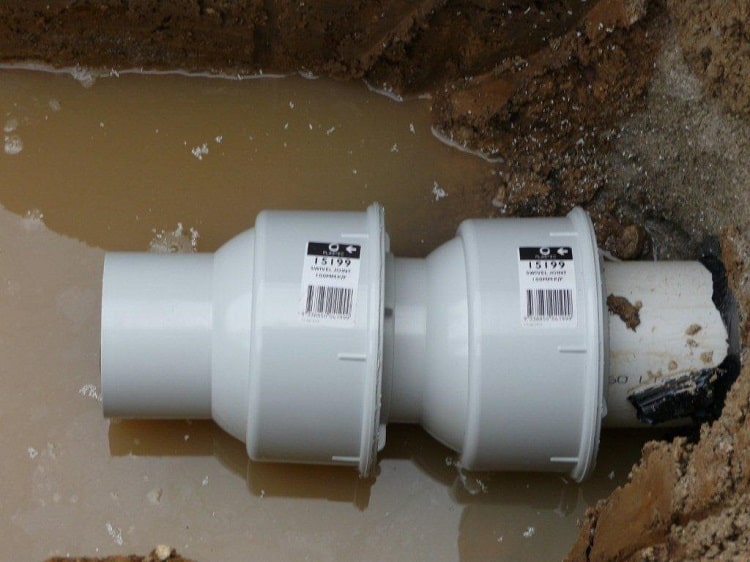 “Approximately 10 years ago, we were doing some work for the Office of Housing (Department of Foreign Services) who own and operate our public housing,” chair of department of civil and construction engineering at Swinburne University Emad Gad says.

“They maintain about 50,000 properties. They noticed that during that time they had high maintenance requirements for some of their houses that were experiencing settlement. That was during the drought. From mid 2000-2010 a lot of existing houses were beginning to show signs of distress in the form of cracks. It wasn’t across all of Victoria, but in a pocket where we have reactive soils. It was discovered that the edges of slabs and footings were dropping. This could have been the result of minimal rainfall or from trees absorbing moisture from the ground. The other thing to remember is the fact that due to a growing population, we are building in areas we wouldn’t have 30 years ago, often in highly reactive areas.

“We started the work in 2012. Around that time the drought had broken. Soon after that time slabs were beginning to heave – grounds that were dry had been filled with moisture and started to swell. This brought with it the opposite effect and now slabs were observed to be curling up.”

As a general rule, when the ground moves so too does the slab. When the slab moves, the walls and pipes do as well and that’s when cracks begin to appear. Plumbing connections break, structural integrity diminishes and home or building owners become understandably disgruntled.

Not only do cracked pipes ruin the effectiveness and sanitation of drainage systems, but leaked fluids can cause additional soil upheaval or subsidence leading to even greater fractures – the result is self-generating, escalating pipe damage.

“Our focus changed from looking at why shrinking occurred, to the issue of heaving,” Emad continues.

“Most homes affected were those built toward the end of the drought around 2006-07. We began to look at environmental factors as well as soil classifications.”

And the latter is where we focus our attention, as that’s where it all begins for you as a plumber or designer.

Before commencing any below ground drainage work, there are a number of things you need to do. In order to select the right drainage design and fixtures, plumbers need to know what sort of soil they’re digging in, apply it to the Standard and fit the drainage system accordingly.

This can only be achieved once soil test reports have been generated by the assigned geotechnical engineer on your project.

With this in mind, always request these soil tests from your builder before you begin work on any new site.

The engineer will take soil samples from the site, subject them to various tests and then specify the correct site classification according to AS 2870/2011 – Residential slabs and footings.

This rating indicates how reactive the soil is, and will help you to decide what design is most suitable for your site in what are known as ‘normal wet’ and ‘normal dry’ conditions.

Below is a list of these ratings indicating what each of them represents:

AS/NZS 3500.2 Clause 5.6 – Drains in other than stable ground – requires practitioners to be aware of the site specific soil conditions they are working in as the soil conditions may affect the performance of any plumbing or drainage installation.

A sub-committee has recently been formed to review the Deemed to Satisfy provisions to be included in AS/NZS 3500.2 and Section 4 of AS/NZS 3500.5. The group included a group of experts from hydraulic and structural engineers, plumbers, regulators, manufacturers and the Queensland Building Commission to ensure nothing was left out and that plumbers and designers have appropriate standards when it comes to laying plumbing and drainage in reactive soils.

The review has been endorsed by the ABCB.

Storm Plastics manager Marco Eibe was one member of the sub-committee who wanted to highlight some particular points of interests that he feels a lot of plumbers overlook when it comes to working in reactive soils.

“Plumbers need to learn about AS2780. They are often quick to say that if it isn’t in AS3500 they don’t want to know about it, but it is referenced in there, and they have to become educated.”

Then there is the issue of clay plugs and lagging, which Marco believes most plumbers are unaware of.

“Clay plugs have been mandatory for years and it seems nobody knows about them. We had a big drainage contracting business for years and didn’t know about it ourselves, until we got into this game,” Marco explains.

“Whenever you build a house and dig a trench for the pipe work, whether it is exiting from underneath the slab or whether it is going through the edge beam of the slab, AS2780 states that you must fill that trench from the base of the trench line, all the way to the top and 300mm out with compact clay soil. That’s what they call a clay plug. It stops the ingress of water from getting underneath the slab.

Lagging is often overlooked too, again, due to a lack of awareness.

“If your pipe work goes through an edge beam of a slab in moderate H1 soil, you have to wrap it with thick lagging such as closed sealed polyethylene that won’t absorb water. You need 20mm thick lagging around any pipe coming out of an edge beam on the horizontal. That’s to stop the water from getting in under the slab. In H2 soil that lagging has to be 40mm thick. This is also outlined in AS2780 which a lot of plumbers are unaware of.” 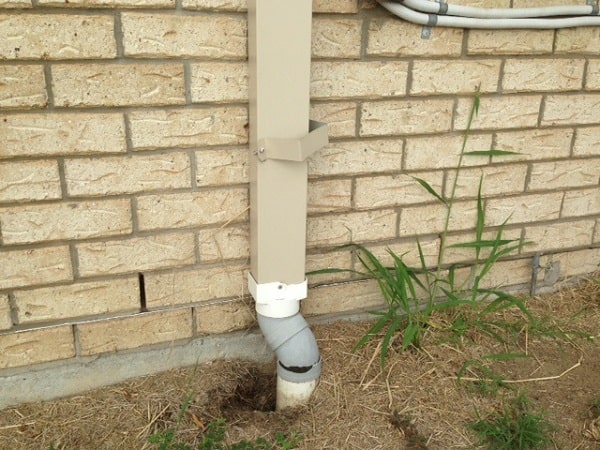 To combat the effects of reactive soils, two Australian companies, Plastec and Storm Plastics, have developed and supplied the market with a range of expansion, swivel and combination joints that can be installed either vertically or horizontally and allow for soil movement without damage.

With that in mind, it pays to do your research to ensure you have the right tools for the job at hand.

Both manufacturers provide suggestions for drainage layouts which can be adapted to suit the particular job at hand, provided all solutions meet AS2780 and the new deemed to satisfy provisions that will be included in AS/NZS 3500.2 and Section 4 of AS/NZS 3500.5.

Cooke & Dowsett design manager Mathew Yanez has recently drawn up a solution for a Bunnings store in Yarrawonga, Victoria, being built on reactive soils and suggests that a good approach to undertake when approaching a project such as this one is “to combine what the manufacturer suggests with what others have done in the industry for a number of years.”

When approaching any project Cooke & Dowsett want to know what type of soil classification is being constructed on.

“We look at the classification to see how much movement we are dealing with. The measures we put in place are dictated by the amount of movement. If you are faced with a sloping site or with bad soil, be prepared for some to be taken out, re-filled and compacted to 95%. Once that is done, engineers will need to give another classification so you are best to wait for that to come back before you start designing.

“We clip drains running beneath the building every 600mm. We put a clip and a tie on and have found that most effective and efficient.

“When backfilling the drain we don’t compact the soil as per usual. It’s a loose fill. When the building moves the pipe moves with it. The critical point is where it leaves the building/footing, that’s where the expansion and swivel joints come in as they allow for the movement.”

New products are continually being developed as technology grows and manufacturers become more advanced in their thinking, so it pays to keep your ear to the ground with what’s on the horizon to make your job easier and to ensure that drainage systems are ready to stand up to the test that reactive soils can bring.

As you can see, the issue of reactive soils is not straight forward and we would require many more pages to fully cover the topic.

While Mother Nature is highly unpredictable, best building practices are not, so the next time you are faced with a highly reactive site, be sure to consult the standards and codes and work closely with the geotechnical engineers and builders to ensure you construct plumbing and drainage that will be compliant.

Further research by the likes of Swinburne University into the effects of changing weather patterns and how future building designs can better cope with such patterns will hopefully lead to less impact on homes in the years to come.

Engaging with the experts for better outcomes

Backflow and the community