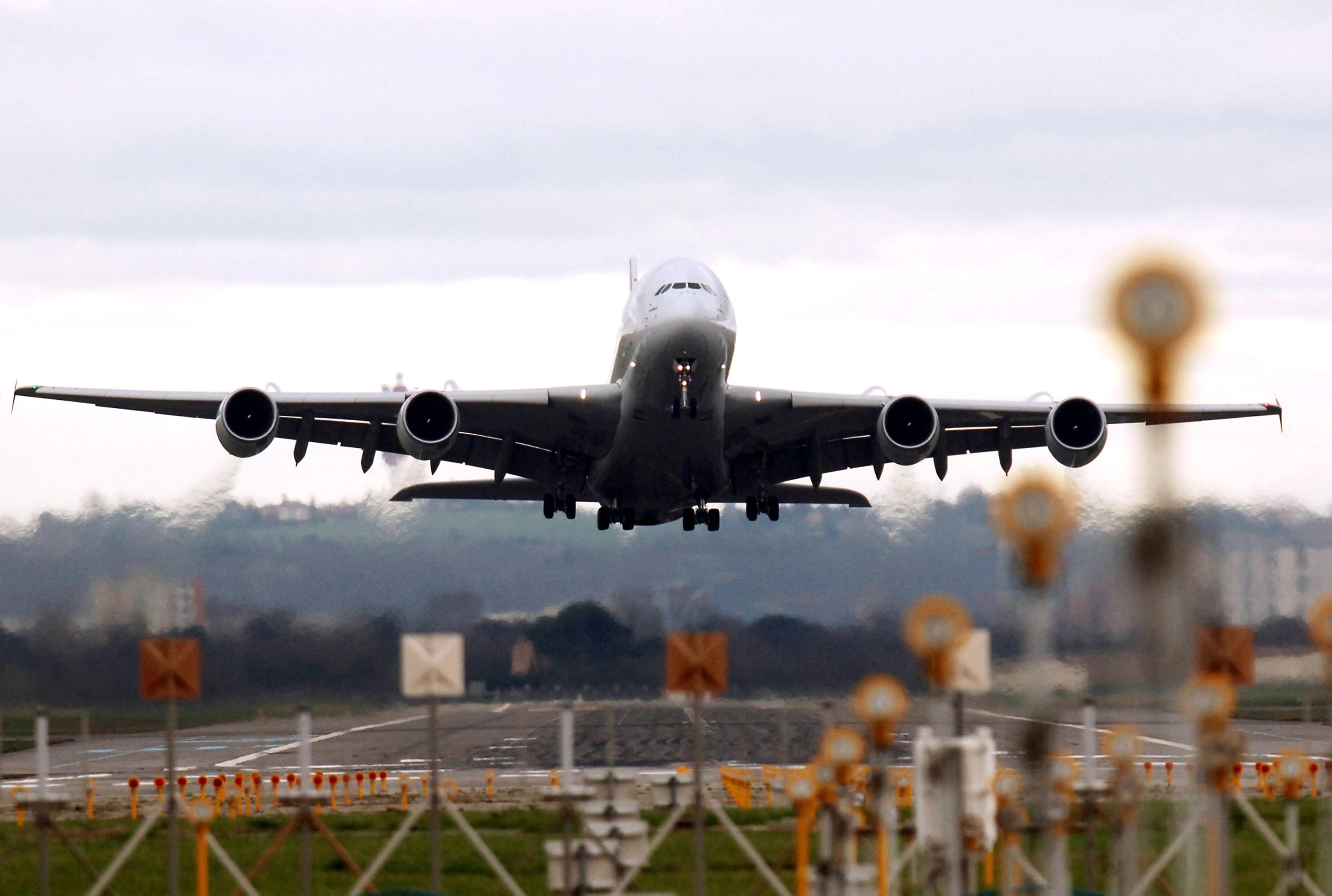 Imagine the equivalent of a large cinema crowd needing bathroom access 30,000ft in the sky. Aircraft plumbing designers are turning to distributed systems for solutions.

It is comforting to know that the giant Airbus A380 airliner has achieved a test evacuation of 853 passengers and 20 crew in just 80 seconds, but another high-speed evacuation on the aircraft will also make passengers feel more comfortable.

The passenger evacuation was carried out in the dark and only half of the aircraft’s 16 exits were used. Participants did not know which emergency doors and slides would be operating.

The evacuation test was the first to be done on a double-deck plane. It was supervised by the European Aviation and Safety Agency in conjunction with the American Federal Aviation Authority.

The other A380 evacuation success is of more interest to plumbing engineers.

An Airbus factory in Hamburg, Germany, houses a three-story test rig that replicates the A380’s almost 1000m of piping. Its main function is to test the effectiveness of up to 20 toilets that can be installed in the aircraft. The rig can be tilted to simulate flying conditions.

Apart from the usual considerations of flushing, extraction and hygiene, plumbing engineers must deal with the odd objects that somehow find their way into aircraft toilets.

Frank Dohrmann is head of design support and cabin testing at the main German plant. He says passengers would not be too upset if the temperature inside an aircraft varied slightly, but if toilets were jammed they would remember it for years.

“Toilets are very important to airlines,” he says. “Some people put anything down there – towels, spoons, glasses, diapers. They behave as if they were at home.”

A typical A380 configuration accommodates about 550 passengers, but charter companies can specify more than 800 seats. That’s a lot of people wanting to go to the toilet.

Consequently, engineers operating the test rig in Hamburg have done their best to block the toilets – then figure out how to avoid serious problems in flight. One airline is reported to have asked for socks to be stuffed into the test toilets.

Waste pipes from the 20 toilets on the rig are fabricated in clear plastic for observation purposes. The pipes in the aircraft are formed from titanium to reduce weight.

Toilet flushing is achieved by pumping air from the system, creating a part vacuum to evacuate waste to a holding tank in the rear of the aircraft.

The engineers have proudly announced a pipe speed ‘best’ on their test rig of 60m per second, which equates to more than 200kmh (125mph). Such speeds are important – the A380 is 73m (80 yards) in length, so it’s a long way from the front toilets to the holding tank.

In a technical paper for the 25th International Congress of the Aeronautical Sciences late last year, Dr Michael Rempe and Dr Murat Ünlü of Airbus write that cabin systems of modern aircraft are increasingly designed as distributed systems.

With the A380 water/waste system as an example, they show how design and testing methods must cover the entire development process.

The design of aircraft water/waste systems has to reflect several requirements relating to flexibility of the cabin and options such as humidifiers and galley inserts. It also has to meet challenging ‘operational interruption’ targets to ensure market competitiveness.

To cope with such requirements, a basic system architecture of four independent waste sub-systems was selected for the A380.

To support the general mechanical system architecture a corresponding distributed control and monitoring architecture based on a serial communication bus –the controller area network bus (CAN-bus) – was chosen.

The potable water system and the waste system are distributed systems – that is, composed of autonomous local small computers connected by a communications network and equipped with software enabling them to co-ordinate activities and share resources.

There are four CAN-buses for the waste system – one for each side on the aircraft’s main and upper decks. All waste CAN-buses are fully autonomous, that is, the system is four times redundant. This is not important for safety reasons but for functional availability.

The potable water system comprises two CAN-buses and an extra one for optional equipment. This suits the requirements of highly operational and customizable systems.

A computer integrates different functions for the water and waste system. It is the interface to the aircraft systems, cabin indications, the maintenance system, etc.

The location and number of toilets, galleys, humidifier valves, etc, depend on the cabin layout, which is customizable. Also future optional equipment must be taken into account when designing a cabin system.

The non-deterministic character of the CAN-bus and its nodes makes testing and the applicability of formal methods more problematic. Integration into the aircraft and verification requires not only a sophisticated test strategy but also lots of test equipment.

The water/waste system of the A380 has about 2,000 parameters. All system components (toilets, faucets, tanks, valves, sensors, etc.) were integrated in the test bench to replicate as far as possible the system’s real behavior on the aircraft.

Connecting all distributed controllers and smart equipment to a central processing unit generally results in an error-prone cable ‘jungle’ with a lot of disturbances and a high risk of problems (wiring failures, perturbations, hardware/software failures, etc.).

The test bench is at least as complex as the actual system to be tested. Any failures under test have to be thoroughly investigated to ensure that they are not in the test bench itself.

The main result of extensive testing might be a failure-free test bench but not a failure-free system. And a complex centralized test system is also not very flexible in terms of modifying the system under test.

However, flexibility is one of the top-level requirements. Testing a distributed system with a centralized test architecture is not straightforward.

A natural approach to testing distributed systems is to apply a decentralized test strategy. The system under test can be separated into autonomous test nodes with mainly decentralized tasks, and ‘smart’ test controllers perform single test tasks.

With a display and a keypad these test controllers can simulate, record and evaluate signals. Each test controller focuses on the signals and communication data of one unit.

This approach has several advantages. These test controllers can be modified easily to adapt to new equipment without extensive changes to the test bench. Also, they are portable and can be used away from the bench – in a climate chamber, electromagnetic compatibility test laboratory or on the aircraft.

This last aspect is of great importance, as the same test controllers can be used for ground and flight tests. A small test controller in combination with a laptop is a mobile, handy and smart solution.

The test methods allow numerous configurations. One possible configuration for integration tests of the potable water system consists of:
• different valves to fill, drain, depress, and shut off the system;
•the potable water indication panel for servicing;
•sensors to measure the water level;
•compressors to provide pressure for potable water distribution to consumers.

The configuration contains the compressors with pressure switches, some valves and the indication panel as real hardware components. The cabin interface computer and potable water level sensors are incorporated as simulation on the test controller or the server.

The illustrated test set-up allows overwriting the real pressure values by the test controllers. In this way, the compressors can be tested by simulating different water levels, tank pressures and flight phases.

Furthermore, the potable water indication panel, which incorporates extensive logics for valve control, can be tested. For these tests it is very important that software-related aspects – like the system logic – are able to be analyzed, and also that the physical and electrical behavior of the system is in focus.

For example, the depress function, which is controlled via the PWIP by sending the corresponding commands to the smart valves, monitoring the pressure at several points in the systems is one of the main parameters.

With the methods shown, different configurations of original and simulated equipment can be set up. So incremental testing is possible, taking into account test progress, test objective, equipment delivery status, optional equipment, etc.

The same methods can be used for validation purposes. For example, in developing customizable equipment the test controllers can be programmed as simulation of the equipment and integrated into the real or partly simulated system.

So, when you take your seat aboard the giant A380 Airbus in the near future and marvel that an aircraft so large can even get off the ground, let alone fly using less fuel than its predecessors, spare a thought for that ‘other’ engineering excellence taking place beneath your feet.