A study into the causes of the 2003 SARS outbreak in Hong Kong, which resulted in numerous deaths and illnesses, yields the lesson that water trap seals play a pivotal role in minimising the spread of deadly pathogens. Justin Felix reports on a revolutionary drainage monitoring system.

Viruses can spread like wildfire and as such we’re prone to contract one or two in our lifetimes. Thankfully the immune system eventually fends most of them off but it is the deadly ones that are generally toughest to prevent.

It goes without saying then, that a preventative method that can stop the spread of infection before it rears its ugly head is certainly a good thing. The Dyteqta-System provides a pro-active solution to the spread of pathogens via a building’s drainage system.

“Building drainage systems are one of only a few engineered fluid carrying systems which link a whole building. If they fail, harmful pathogens may enter the building and spread life-threatening viruses and diseases,” Technical Director of Dyteqta, Steven White explains. Such was the case in the 2003 SARS epidemic in Hong Kong.

Poor plumbing and maintenance were identified as a contributory factor and as a result the drainage system became a cross-transmission route for the SARS virus, leading to a dramatic rise in the number of cases in one particular building. There were 321 infected cases and 42 deaths in Amoy Gardens housing estate alone. A tragedy that could have been avoided if it weren’t for depleted floor traps.

If such an outbreak had this type of detrimental impact on relatively healthy occupants, a similar event occurring in a hospital or aged care facility, where health is already a concern, could have devastating outcomes.

RESEARCH AND DEVELOPMENT
The Drainage Research Group of Heriot-Watt University, Edinburgh, went to work in 2004 on an innovative system for mapping and assessing water trap seal vulnerability in building drainage systems.

The invention then developed in conjunction with industry and the UK Government, resulting in the ongoing partnership with Dyteqta. Dyteqta is an off-shoot of the same team behind Studor –leader in drainage ventilation technologies. The Dyteqta-System is the result of nearly 10 years of academic work reported in peer reviewed journals and extensive site testing by academics at Heriot-Watt University (Edinburgh) and the Dyteqta Team.

Recent research has sought to identify bioaerosol activity in building drainage systems. Bioaerosols are pathogens which can be transported through air flows, either as airborne pathogens or, as in the case of the building drainage system, virus laden droplets which can be transported in the air via aerosols. Researchers at Heriot-Watt University, led by Dr. Michael Gormley, in collaboration with virologists from the local health board and with support from the Dyteqta team, conducted a series of tests to investigate the extent to which a drain is contaminated during a norovirus outbreak in a hospital building. In addition to searching for pathogens they also investigated the environmental conditions inside the drain itself. The techniques used were innovative and involved DNA coding of pathogens using a polymarese chain reaction (PCR) technique.

The six-week-long test program drew samples from the collection drain and sought to identify a particularly troublesome virus – norovirus which leads to gastro-intestinal illness, is highly contagious and causes disruptions to hospital management since an outbreak leads to ward closures with disruption to patient care and attendant high costs.

The tests were conducted over a six week period and the results were striking.  The PCR technique identified the presence of a significant amount of norovirus GII – strong positives were indicated for the samples from the drain, indicating that the entire drainage system was contaminated during an outbreak.

Investigations into the environmental conditions in the vertical stack revealed that, as expected, the relative humidity was almost 100% for most of the time, conditions conducive to virus survival. The temperatures recorded were in the mid-20° Celsius range, and had the combined effect of inducing buoyant air flows and a transport mechanism for the virus. A significant finding from this phase of the research was the confirmation that airflows in vertical stacks are in both directions – both up and down. This mechanism facilitates air travel from one part of the building to another – in effect the drainage system has its own micro climate and there is no isolation of one part of it from another. Ensuring a seal between the internal rooms and the drainage system is therefore essential to prevent virus laden aerosols entering habitable space.

HOW IT WORKS
The Dyteqta-System uses innovative sonar technology to monitor a building’s drainage network while detecting any loss in water trap seals which are vulnerable to a number of threats such as evaporation and/or positive and negative pressure surcharges, amongst other reasons.

When these vital seals are lost, sewer gas containing contaminated air and harmful pathogens, in the form of Bioaerosols, present in the drainage and sewer system can enter the building and spread infection and/or foul smells. Most, if not all, have experienced the foul stench that can be experienced when pipes have blocked or backed up and the thought alone is enough to put you off your next cut lunch.

Steven explains that the spread of infection and foul smells can be stopped thanks to Dyteqta’s monitoring system. 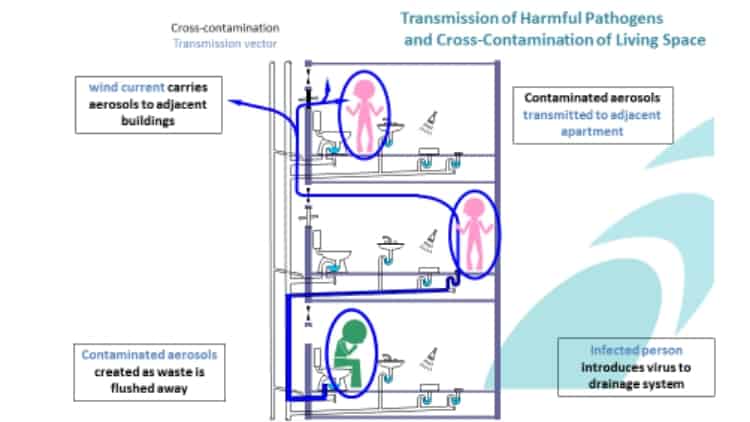 “The system uses soundwaves to send a signal into the system to search for the trap seals. If a barrier has been lost, the system will send an alarm and identify where the defective seal is located. By connecting Dyteqta’s testing equipment to a drainage system, we can remotely test all of the traps connected to it from anywhere in the world, as long as it is connected to the internet.

“Detection is accurate to within one metre for partial blockages and 20cm for trap seals.” Once a default is detected, the Dyteqta System sends a message, either via email, SMS or through the buildings Building Management System to alarm facility management.

“Testing is both non-destructive and non-invasive so building occupants are unawares while it is occurring,” Steven explains. “There are various methods for system monitoring too, from a full-time monitored system, fault-finding during system health checks or before a building handover. A prospective buyer or lessee of a building now has an opportunity to detect and rectify drainage problems before they agree to terms. It almost provides the option to try before you buy,” Steven says.

“Plumbers and HVAC engineers will require a week’s worth of training to establish installation requirements and to conduct the set up test. Installation on a typical 20 stack building will take about two days to complete.”

The system is upgradeable too, so additional stacks can be added as required. As it stands, only one stack is tested at any given time. Testing and installation is carried out on-site, usually in the plant room or the roof area. The Dyteqta team monitors a building remotely; however, a simple user interface can also be accessed by internal building staff. If a defective trap seal is detected, building managers are alarmed and can replace or rectify before the situation becomes critical.

“The user interface is really easy-to-use,” says Steve. “It allows facility managers to prioritise stack testing by setting them as High, Medium or Low which is especially useful for health care facilities that have a high spread of pathogens.”

MEASURE AND MANAGE
Michael Mekhitarian, Australian Director of Dyteqta adds, “Unlike electrical and gas work, there haven’t been any formal tests for plumbing as such. With the introduction of Dyteqta, this is no longer the case. The ability to test the system after design and throughout a building’s life provides assurance that the building drainage system is working correctly.”

“People tend to look up at air conditioning systems and vents when inspecting buildings. They neglect to look down at the drainage systems and this is a cause for concern,” Michael says.

Current regulations tend to ignore drainage systems as a major concern for the spread of disease or cross contamination. As such, a simple pressure test is all that is required to check the seal between drainage pipes at the time of commissioning. This leaves the potential for inadequate and poorly designed systems. Contrary to this; the water supply, heating, ventilation and air conditioning systems are subject to heavy regulation because of pathogens being linked with these sources. Norovirus, on the other hand, can spread through building drainage systems and enter into rooms through defective traps.

Dyteqta reduces the risk of infection through cross-contamination; contributing to a healthier living environment. In a hospital, for example, the drainage system links every department; from general medical and isolation wards to operating theatres, mortuaries and public waiting rooms.

The Dyteqta-System is the first of its kind and marks a major advancement in the battle against transmission of disease through cross contamination and prevention of bad odours; not only in hospitals but across hotels, apartments and offices too.

By taking a pro-active approach, facilities have the ability to better protect the health and safety of building occupants by stopping the spread before it occurs. Plumbers will not only benefit from more facilities adopting the innovative system through increased work; they will also play a pivotal role in enhancing public health security.

The Dyteqta-System has arrived down under with the first installation taking place in Melbourne’s Royal Children’s Hospital. This is a great opportunity for the Australian building industry and will allow other facilities to see the many benefits that the detection system provides.  A hospital of this magnitude makes for the perfect test project and the Dyteqta-System will go a long way to ensuring the health of the building’s drainage system. Plumbing Connection will follow the progress and keep you up-to-date in a future issue.